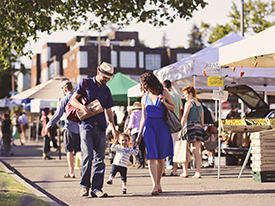 [Press Release] BERKELEY, June 13, 2016 – The healthy food incentive program Market Match is increasing access to fresh produce among Californians who are struggling to feed their families, while giving an economic boost to the state’s embattled farm communities. Any day, Governor Jerry Brown is expected to decide whether to take advantage of federal matching funds to expand Market Match by funding the California Nutrition Incentives Act. The proposed $5 million in state funds would attract federal matching dollars through the USDA’s Food Insecurity Nutrition Incentive program (FINI) and double the impact of the state’s investment.

One year ago, the Ecology Center, which administers Market Match statewide, received one of the USDA’s first FINI grants, totaling $3.7 million over two years. Preliminary evaluation results show that the program, through the grant funding, is on track to connect nearly 240,000 food-insecure shoppers with 2,200 of the state’s small farms, stimulating $9.8 million in fruit and vegetable sales.

As June budget negotiations heat up, the Sacramento Bee published a strong endorsement of the funding proposal and of Market Match’s valuable statewide impacts. Both the California State Senate and Assembly included a $5 million appropriation to fund the program, but it remains to be seen whether Governor Brown agrees. In 2015, Brown axed the $2.5 million that the legislature requested for the program.

Last year the Ecology Center led California nonprofits, without help from the state, to raise $3.7 million in private funds and in-kind contributions to secure the federal FINI dollars. This enabled the Ecology Center to expand the number of farmers’ markets and other farm-direct sites that offer Market Match from 153 at the start of 2015, to 263 in 2016. After one year of FINI funding, Market Match has served 105,518 CalFresh shoppers, who spent $2.46 million in CalFresh and Market Match, which went to 1,602 small farmers across the state.

The evaluation of FINI-funded Market Match is being led by Howard Greenwald, Ph.D. of the Sol Price School of Public Policy, University of Southern California, and utilizes direct observation, consumer and farmer surveys, program manager interviews, and intensive consumer surveys. Of the 844 shoppers surveyed so far, over 70% report that they are buying more fruits and vegetables overall, and nearly 80% report that their family’s health has improved, as a result of Market Match.

“Our preliminary data indicate that Market Match advances a ‘culture of health’ in disadvantaged communities,” said lead USC evaluator Greenwald, pointing to a concept that is gaining traction in public health circles. “Participants report walking with friends to the markets and bringing their children to play at nearby parks. Public spaces like farmers’ markets also invite socialization, which public health studies show help prevent disabilities and extend life expectancy,” he said.

81% of farmers report increased sales and 74% report increased income, thanks to Market Match. These sales are coming from customers who would otherwise not be there: three-fourths of survey respondents say that Market Match is the reason they came to the farmers’ market. Many have become repeat farmers’ market shoppers. As a result of the new customer influx, nearly 40% of participating farmers report expanding their operations by hiring more workers at the market or on the farm, planting more acreage, purchasing more equipment, or growing new or different produce.

“Any additional money that Market Match brings goes straight back into the poor rural areas of California,” said Tim Mueller, owner of River Dog Farm in Capay Valley. “From the urban center to the rural areas, Market Match is a great way to get more dollars into the California communities that need it most.”

The added economic activity that Market Match brings is not limited to farmers: it also boosts local businesses. For every dollar spent on Market Match, customers report spending nearly a dollar of their own money at nearby businesses, according to the evaluation. This adds up: during the first year of FINI funding, Market Match shoppers spent an estimated $1,208,996 on consumer purchases at neighboring businesses.

In spite of the FINI-enabled expansion, the demand for Market Match far outstrips the supply of funds, and the distribution of Market Match sites across the state has been uneven. In some cases, the farmers’ markets with the greatest need have been unable to use the program due to lack of capacity by market operators. If Brown chooses to allocate state money to attract more FINI funding, it will further enable Market Match, and programs like it, to expand in an equitable way across the state, and to better serve the areas that need it most.

NOTE: Last week, the USDA announced its 2016 FINI grantees. The University of California, San Diego will receive nearly $3.4 million, with smaller grants to these California nonprofits: