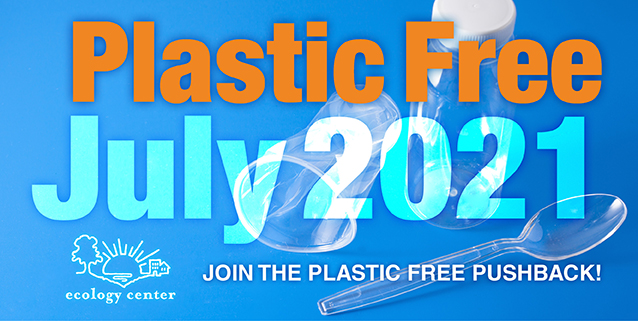 Our 2021 Plastic Free July events have concluded, but the plastic-free, reuse, and refill movements continue! Check out our resources below to participate:

Thank you for joining the Ecology Center during PLASTIC FREE JULY, a series of events for community members to learn, take action, get tips on reducing plastic waste, and connect with others who are concerned about the global problem of plastic pollution.

In 2017, the City of Berkeley officially declared July Plastic Free Month joining international efforts to reduce plastic. Plastic-Free July is an annual event that began in Western Australia in 2011 and has spread across the globe. It aims to raise awareness of the amount of plastic in our lives by encouraging people to reduce their reliance on single-use plastic disposables, reduce plastic pollution, and push for lasting solutions to the plastic pollution crisis- during July and beyond.

With the world still trying to emerge from the COVID-19 pandemic, it has been trickier than usual to avoid single-use plastic. The plastics industry worked hard to elicit fear and uncertainty around reusables as they take advantage of the current throwaway culture of our society and plague our world with disposable products giving us virtually no choice but to purchase plastic in some way. Though efforts to rollback the historical efforts to reduce our reliance on single-use plastic disposables and shift to reuse and waste reduction models have been somewhat successful, we must continue our forward momentum in combating the plastics crisis.

View our EcoCalendar for a full list of activities. We will be back in 2022 with new Plastic Free July events. Until then, sign up for our newsletter for the latest news and updates.

In this class Lori Caldwell, owner of CompostGal Consulting will show participants easy and budget-friendly non-toxic pest control techniques to help tackle and prevent typical garden pests and animals that look at your garden as a good meal. From including plants that attract insect eating butterflies to enclosures to natural sprays, you will come away from this class with a list of methods that will support your sustainable garden in a way that will support the earth.

Join the Ecology Center for a forward-thinking and action-oriented panel discussion with local and national leaders in the reuse movement to learn more about current and upcoming happenings in the fight against single-use plastic disposables. Panel discussion will be followed by a live audience Q&A. You can view a recording of this event here.

Steer away from disposable plastic wraps with a reusable, safe alternative: beeswax cloth food wrap. In this workshop we will make our own wraps that can be used to cover containers in the fridge, keep bread, your lunch, or vegetables fresh. It even works well for cheese!

In this class you will learn how to make the ultimate recycled market bag from “plarn” using various sizes and colors of discarded plastic grocery bags. You can add your personal style to your market bag while creating a wholly functional, water resistant carry-all that you can show off at your weekly Farmers Market shopping adventure.

In this class you will be guided in creating your own meal plan, how to shop and what to do once you get the groceries back into your kitchen. Learn the best way to store food, create menus, prepare meals and use leftovers.

Join the Ecology Center and a cadre of plastics policy experts, leaders, and organizers for an informative and encouraging overview of the 2021 plastics policy agenda. Learn more about these new and improved bills as we breakdown how they address significant issues impacting the plastic crisis such as extended producer responsibility for packaging, reuse, deposit-return systems, and what’s new in the Break Free From Plastic Pollution Act. You can view a recording of this event here.

Support Beyond Plastics and the Break Free From Plastic Pollution Act, the bill we need to support to address the plastic pollution crisis by calling your representatives!️

The phone lines are open! – Call Congress About The Break Free From Plastic Pollution Act!

1. Check to see if your Senators and Representative have already signed on to co-sponsor.

4. Repeat the process until you’ve called all three of your members of Congress.

Bills that need your support:

Assembly Bill 1201– Compost. This bill bans the sale of plastic products that are labeled “compostable” unless it meets specified standards and criteria. Send a letter or give your statement to support to Assembly Member Phil Ting. Signed by Governor.

Assembly Bill 881- (Plastic Waste Exports) which closes an existing loophole in California law that allows mixed plastic exports to be counted as recycling regardless of their ultimate destination, which is often overseas landfills, incinerators, or waterways. Contact: Assembly Member Gonzalez. Amendments enrolled, presented to Governor and requires signature. (Sept. 7).

Assembly Bill 818 – Wipes. Requires certain premoistened nonwoven disposable wipes to be labeled with the phrase “Do Not Flush” and prevents them from making flushable claims. Contact: Assembly Member Richard Bloom. Signed by Governor.

Assembly Bill 1454 (Bottle Bill Modernization) which helps keep recycling centers open and provides much-needed support for new centers to open in areas where there are not enough centers to serve consumers, including rural and urban areas, Send a letter or give your statement to support to Assembly Member Richard Bloom. Last action: changed to a 2 year bill, continue to revise it and bring it back during the 2022 session.

Currently in the Assembly:

SB 343 (Allen) – Truth in Labeling for Recyclables. Builds on California’s current “Truth in Environmental Advertising law that prohibits the use of the word “recyclable” on products that are not truly recyclable and should not be put in a curbside recycle bin. SB 343 extends this prohibition to include the “chasing arrows” symbol, which most consumers believe denotes recyclability. Send a letter or give your statement to support to Senator Ben Allen. Read this toolkit for more information and how you can best help support the Bill. Last Action: Signed by Governor.

Resourceful is the hub to learning more about proper recycling: plastics, cardboard, and more! It is recycling made simple.

As we celebrate Earth Day this month, we also want … Read more »

Myths vs. Facts: Dispelling 5 Myths about Reusables During the Times of COVID-19

As the COVID-19 pandemic continues to run its course, human … Read more »