It can feel impossible to get away from using plastic. In our consumer world, plastic is everywhere and deciding what to do with it, can be confusing. 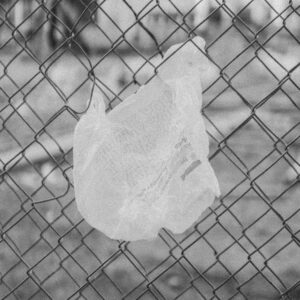 More than 4.83 million tons of plastic film has been generated to date and only about 9.1% of that plastic is recycled.

The Ecology Center Helpdesk fields dozens of calls each month highlighting the challenges that come with plastic disposal. Where can I take my plastic bags and film? Is it being recycled? Where does it go?

Figuring out what to do with what the industry calls film plastic—produce bags, plastic wrap, dry cleaning bags, padded shipping envelopes, trash can liners, food pouches, newspaper bags, and other flexible plastic packaging—is a difficult task, but the Ecology Center is here to help.

It has taken our staff months to track down answers about where plastic bags, and other plastic films, end up when collected at local stores. In short, we don’t know the final destination of most plastic film because recycling is an ever-changing industry, in which markets are constantly shifting. While there were significant roadblocks and a serious lack of transparency, we were able to conclude that, like many other plastics, we can’t guarantee that plastic film is getting recycled, even if it is clean, dry, and disposed of in the “right” place. We also know that all plastic ever manufactured is still on this planet. Whether it is in use, recycled, landfilled, or in micro pieces in the environment, there is no “away” when we throw out plastic.

So what can you do? The best solution is to recycle what is accepted, and to refuse and/or reduce the rest!

Understanding that it is not always that simple, we’ve compiled additional info and answers to some of your pressing questions about plastic bags and film: 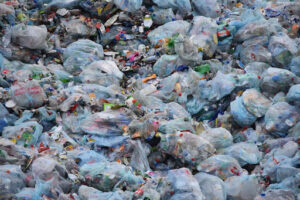 Plastic everywhere. How did we end up here?

Since the 1980s, disposable plastic film has provided a convenient way to bag groceries and carry purchases, transforming the way we shop and store our items. Plastic bags are relatively strong, incredibly cheap, waterproof, and, perhaps most importantly, made to be thrown away. The plastics industry sold consumers and retailers on the convenience of “disposable” plastics. Whether it be in the kitchen cupboard, the landfill, or the ocean, plastic is piling up.

In the 2000s, a new shift in packaging began moving food and other consumer goods out of boxboard, and even cans, and into new kinds of plastic bags and pouches. Newspapers moved from delivering their papers with just a rubber band to delivering in a plastic sleeve, rain or shine. Online purchasing drove significant increases in plastic shipping bags and fillers. Today there are dozens of new applications of flexible plastic packaging used in hundreds or thousands of ways.

In 2009, the Ecology Center piloted a disposable bag reduction strategy, banning plastic bags and charging for compostable or recyclable ones, at our farmers markets. This strategy was followed by San Francisco and later, Alameda County. This movement inspired California to pass the Single-Use Carryout Bag Ban (SB 270) through legislative action in 2014. This was challenged by the plastic bag industry who ran a ballot measure in 2016, Prop 67, in which voters ratified the legislative action. As a result, grocery stores, liquor stores, convenience stores, and pharmacies, were prohibited from distributing single-use carry-out bags. This law significantly reduced the amount of disposable bags, however, other kinds of plastic film remain abundant.

Why have grocers like Berkeley Bowl, or recycling centers like the one in the City of El Cerrito, stopped collecting plastic film?

From 2007 to 2019, the state of California mandated stores to collect plastic bags for recycling via SB 270. Many large retailers utilize large quantities of plastic wrapping to secure boxes onto pallets. Until recently, this clean, uniform, bulk material had decent markets. Though blending in some post-consumer film collected from customers into the bulk bales was not a big deal initially, markets have since collapsed and quality control has become prohibitive. Today, if retailers can even identify a market, the material has to be extremely clean and not mixed with multiple types of colors of plastic. On top of that, as of January 1, 2020, the SB 270 mandate has ended and stores are no longer required to collect (and ideally recycle) plastic film.

In March 2019, Berkeley Bowl informed us that the plastic film collection service they were using shared that the collected plastic bags were in fact not being sold for recycling and were instead being sent to the landfill. So, Berkeley Bowl decided to stop collecting it. This is a common story, and explains why so many supermarkets have stopped accepting plastic film donations.

Who is collecting plastic bags/film?

The Ecology Center in Berkeley has never accepted plastic bags or plastic film in the blue curbside recycling cart—they get tangled in sorting machinery causing safety and efficiency issues.

In the East Bay, we know that some Walmart, IKEA, Target, Safeway, Whole Foods, Trader Joe’s, and Lucky grocers locations will accept plastic bags, but this is likely to change.  Because of their volume, these large chain stores may be able to accept the public’s plastic bags to mix with their own that gets aggregated in regional warehouses. The Ecology Center advises to always contact locations first to ensure they are still accepting these materials for recycling.

Do plastic bags and film actually get recycled?

We found that some plastic film does get recycled into other materials, but it is difficult to follow these film plastics into their next form. The entire recycling process is not well tracked, and thus, for the most part, we do not always know what becomes of the post-consumer plastics that are processed. This is part of our concern, and why it is most important that we focus on reducing our use first. To the best of our knowledge, the most common end products are plastic lumber and woven plastic shopping bags.

Why isn’t there a market for plastic film in other countries?

The U.S. used to sell most of its plastics to China. China was able to buy a lot of this plastic due to low wages and environmental protections. Unfortunately, much of this plastic ended up in informal and uncontrolled industries where the residual (sometimes 50% or more) was burned or illegally dumped, entering our oceans and other waterways. However, in 2017, China stopped accepting mixed plastic scrap because it was so poorly sorted and full of non-recyclable plastics and other contaminants.

At the same time, because of increased fracking for natural gas and petroleum, virgin plastic is cheaper and more readily-available than recycled plastic, and thus large companies opt for the virgin plastic. The fracking boom has only exacerbated the collapse of recycled plastic markets. Some major brands have recently begun to include more post-consumer plastic in their packaging in response to consumer demands, but this has not had major impacts yet.

In 2020, prospects are grim for international plastic film markets. Most have closed down completely or are only accepting extremely clean, uniform industrial scrap (like leftovers from production), as opposed to post-consumer waste. New international laws like the Basel Convention have begun regulating mixed plastics and film specifically, and many countries are now rejecting contaminated shipments. Some unscrupulous, grey market, and illegal waste trade still exist, but there are increasing barriers even in less regulated countries.

What can we do as individuals?

As a consumer, you vote with how you spend your dollar.

Last but not least, visit our EcoStore and online store to purchase and learn more about sustainable products for your home—we have all the alternatives you need. As our store product policy, we generally avoid products that are:

This article was written by Andrea Tineo and James Hosley of the Ecology Center Help Desk.

36 thoughts on “Trying to Recycle That Plastic Bag? The Odds Are Nine to One It’s Not Happening”