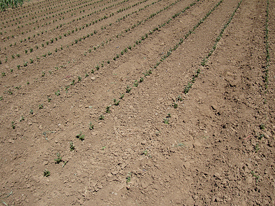 This year, the hills by my house didn’t turn green until late February. Although big drops of hope fall outside my window as I write, it gives me a false sense that everything will be okay, that perhaps we are not facing the biggest drought in many people’s lifetimes. I say this because this system of storms, although immensely helpful, would need to keep coming twice every week, for the next few months to bring any significant changes in the shortage of water our state is facing.

Many of the farms that sell at our market have already reported how the current drought is affecting them. Depending on the local conditions and type of crops farmed, the severity may be different, but it hits all farmers. For farms that mostly grow irrigated row crops, drought hits them the hardest. Some years certain winter crops can mostly live on water falling from the sky, making this extremely dry winter totally suck. Tim at Riverdog said he was running full irrigation crews in January, normally something that happens only in summertime. His partner Trini said, “Did we tell you we’re not growing any corn this year? Yeah, Fully Belly said they weren’t either.” Their irrigation district in Yolo County is particularly hard-hit. The two reservoirs that supply their irrigation water are below any level for releases, prompting the district to announce there will be no water delivered this year. This leaves the water available for crops limited to wells on the farm. But with hardly anything flowing down Cache Creek nearby (it was flowing at summer rates in early February) the groundwater table is not being replenished, making the possibility of pumping wells dry a distinct reality.

It isn’t really any better for farms where orchard crops are the bulk of the operation. Citrus needs a fair amount of consistent water to keep its shallow roots happy. Winter here should be a time that farms get a break from irrigating their trees. This year however, the pumps were running, keeping it just wet enough to keep everything going. Then in a double whammy of weather, at many farms even more water was used for the citrus trees to try to prevent frost damage. This happens each year to some extent, but this year we got hit by some of the worst freezes in the past 10 or more years, damaging many of the different crops still on the tree. (Wonder where Blossom Bluff has been this winter?) Didar Singh with Guru Ram Das Orchards said even for the varieties where the fruit was already picked and “spared” this year, it was still bad enough to damage the trees, making it likely that next year’s crop will be poor.

For areas of the state known for apple production (Sonoma, Mendocino and Monterey County) many of the old orchards were dry farmed. Apples are a crop well suited to the long dry spells of summer and fall. Timing is key. For apple orchards, a dry winter is problematic, but a bit less since the trees are dormant at the time. For the trees, this “down time” is critical for the cycles of growth and regeneration, but when the trees “wake up” they need access to moisture. “The soil was so dry and crunchy, in January, I wasn’t just wondering if I was gonna have a crop,” said Dan with Flatland, “I was wondering if my trees were gonna die.” He does have other water needs though. What happens when the house well goes dry? When this happens there is nothing for their shower, toilets, or the greenhouses. “This is occasionally September, but this year it happened twice in January!” The big storm system that came in mid-February dumped tons of rain on the North bay. Darn near 10 inches of rain fell in parts of West Sonoma County. “It felt like it was two out, two strikes, bottom of the ninth. Then we got that Valentine’s Day storm.”

What about dry-farmed row crops? Like the beloved Early Girl tomatoes that folks rave about? At the end of January I had the fortune of attending the Eco-Farm Conference. The spectre of extreme drought that has been looming for the past few years, (this is after all the third dry year in a row) was now out in the open. There was talk about how to change your crop planting times and varieties to deal with this year’s extreme conditions. The dry-farmed workshop I attended had people nearly sitting on top of each other. I heard things like, “So, how much water to you think I need to irrigate my fields with, so that it will be moist enough and penetrate deep enough so that I can then dry-farm my tomatoes?”

“I don’t know if I can answer that one” said David Little of Little Organic Farms. “I had the fortune of learning from the old-timers their techniques of tillage and rolling to best capture the moisture and keep it there. And it has worked for 20 years.” Every year, there has been enough moisture at some point to get in crops. Some years, the plants might look awful, and the yields are extremely poor, but the flavor is the best. “I’m a dry-farmer though. I don’t know about drought farming.”

What about if your crop is healthy pastured animals? For farms with grass-fed cattle, a lack of rain spells disaster. Nothing to eat when there should be abundance means Farmers use the forage they do have to keep some breeding stock alive for the future. This means either “s-l-a-u-g-h-t-e-r” or “a-u-c-t-i-o-n” is how you spell this scenario. Farms might not have the market or storage to absorb the excess that comes from slaughter. And it costs money. Auction is also problematic because just about everyone else will be doing it and the tiny bit of income derived will be just that – tiny. Farmers can try asking neighbors and other local farms if they have available pasture. Might need to be organic though. That will limit your choices right there. What about animals not used to being moved around? Stress and time in transit can take a toll, on the farmers as well. Takes a lot of time finding those connections to available pasture, gathering the animals that need moving, and getting them there, then back.

This will not be an easy year for anyone. There is no real happy ending in sight. Not to sound to heavy, but, damn. I’m glad someone else is doing the farming work because the odds are stacked against them. Where I find comfort in all this is that the farmers we have at our markets are some of the best people I know. Folks with stamina and optimism to put food on our plates. I’ve heard from many, “Well, we might be spending a ton of money on more drip-tape irrigation than ever this year, but ultimately that will help us conserve more in the future and lead to a more sustainable farm.” Couple that with, “We’re used to losing money most years. We just need a good one every now and then.”

I stand in awe.

One thought on “View from the Farmers’ Market: Farming Through the Drought”