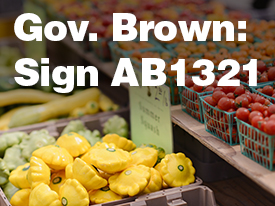 We are thrilled AB 1321, a bill we co-sponsored, has passed the both houses of the state legislature with strong bi-partisan support, moving it forward to the Governor’s desk. AB 1321, the Nutrition Incentives Act, will help California receive federal funds for nutrition incentive programs, like Market Match, to expand healthy food access at farmers’ markets for low-income Californians receiving food stamps. The Governor has until October 11th to sign it, and we are hopeful that he will – but Californians up and down the state should share their support. Big thanks to our partners Roots of Change, Public Health Institute, Latino Coalition for a Healthy California, and to all those who have helped get this bill where it is today. Read on for a press release from bill author Assemblymember Phil Ting (D-San Francisco), and a sample script to call governor Brown and let him know you support this bill!

Hello, my name is __________ and I live in/work at __________. I am calling to urge Governor Brown to sign AB 1321: CA Nutrition Incentives Act. ​AB 1321 is a step in the right direction in order to end food insecurity and keep our families and local economies healthy. It would also leverage federal matching dollars. The Legislature gave strong bipartisan support for this bill and I hope Governor Brown will support it too by signing this bill into law.

Assembly Bill (AB) 1321 passed the Assembly today with a 56-16 vote, following a 30-8 Senate vote on Wednesday. It is now pending Governor Jerry Brown’s signature or veto by October 11.

“We must improve access to nutritious food. The healthiest choice should be the easiest choice,” said Ting. “Diet is the foundation for good health. We can expand access to our state’s bounty by enlisting farmers’ markets in the fight against hunger and malnutrition. As the drought pushes food prices upward, we can ease the squeeze on families still waiting for the economic recovery to benefit their bottom line.”

AB 1321 directs the state’s Department of Food and Agriculture to obtain federal funding to provide incentives for food stamp recipients to shop at farmers’ markets. The federal farm bill of 2014 set aside $100 million to encourage the purchase and consumption of fresh grown produce through the Food insecurity Nutrition Incentive (FINI) program.

Other states have taken a leadership role in obtaining these funds for their residents. Their success shows the need for California to do the same. In April, the feds announced the first found of FINI grants. Many of the largest grants went to states like Washington and Massachusetts, which coordinated state efforts targeting these funds.

“We should be getting more of these funds,” added Ting. “California is positioned to benefit from this program more than any other state because of our network of farmers markets and poverty challenges.”

With over 400 commodities in production, California has unparalleled agricultural diversity. It also has the largest network of farmers’ markets of any state, comprised of over 700 markets. Over 11 million Californians live in poverty and 4 million struggle with food insecurity – or inadequate access to sufficient, safe, and nutritious food.

Here is what supporters are saying about AB 1321.

“We believe that California and the nation will be more healthy and resilient if we enhance food system infrastructures that make healthy food accessible and affordable. This bill contributes to the physical health of individuals, the economic health of small farms and rural communities. It is a win-win solution that cannot be missed.”
-Matthew Marsom, Vice President for Public Policy and Programs, Public Health Institute

“Limited resources for purchasing food has a dramatic impact on health and the risk of developing chronic diseases, like diabetes. This disproportionately impacts communities of color and is a critical factor in widening rational and ethnic disparities.”
-Justin Rausa, Policy Director, Roots of Change

“While California is now the world’s 7th largest economy, we still have the highest poverty rate nationally. Limited resources for purchasing food has a dramatic impact on health and increases the risk of developing preventable chronic diseases, like diabetes, with disproportionate impacts on communities of color in California.”
-Martin Bourque, Executive Director, Ecology Center