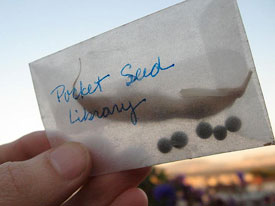 A new national campaign and petition has been launched by local organizations to protect seed libraries from legal changes that have hindered them in several states. The Sustainable Economies Law Center (SELC), Richmond Grows Seed Library, and Shareable, with support from the Seed Matters project and Clif Bar Family Foundation, are behind the new Save Seed Sharing campaign to prevent seed libraries from being regulated out of existence. The campaign is a response to a seed law being enforced at a seed library in Pennsylvania in 2014, which got national press and raised red flags for other seed libraries. Read this article from the Wall Street Journal for the background of that case.

Neil Thapar is working on this campaign for SELC. He says the campaign has launched with grassroots coalitions forming in Pennsylvania, Minnesota, and Nebraska to make changes to laws affecting seed libraries in those states. “Specifically, these laws require expensive and resource-intensive labeling and testing requirements for any seed distribution in the state. While the law is supposed to apply only to commercial distribution of seeds (i.e. sales), the law is being interpreted to apply to free or noncommercial sharing of seeds as well. This is what we are trying to change.”

As for California, there are some concerns with the laws on the books, but as of yet, there has been no direct threat to our popular seed libraries, like BASIL, housed at the Ecology Center.

The campaign also hopes to build national awareness and a base of support for seed libraries. Nationally, seed libraries have taken off in recent years, and that’s a good thing that we should all work to protect. Head over to their campaign website to sign on your support to save seed sharing for communities everywhere.