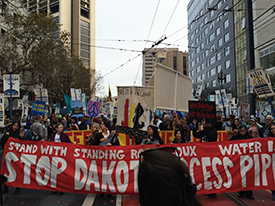 The Ecology Center stands with Standing Rock, a Native American, youth-led movement for justice, clean water, and a stable climate. Thousands of miles away in North Dakota, a proposed pipeline was rerouted to protect the water supply of the mostly-white residents of Bismarck and is now putting the water for native communities at risk. We stand with the Water Protectors, the people at Standing Rock who have led a nonviolent protest to stop the construction of the Dakota Access Pipeline at the Missouri River, a sacred site half a mile from their water supply. Despite months of outcry, this oil pipeline project is close to completion. To learn more about the background of the Dakota Access Pipeline, read this article.

Standing Rock represents an intersection of social justice and environmental movements that the Ecology Center deeply supports: Native American resistance to centuries of human rights violations and broken treaties; the push for safe, clean drinking water, which the Flint crisis has also underscored; and the peaceful, organized resistance to expanding fossil fuel infrastructure. 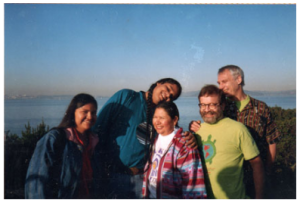 In 1992, Berkeley replaced Columbus Day with the first Indigenous People’s Day celebration, in recognition of 500 years of resistance from 1492-1992. Ecology Center leader Mark Gorrell and his partner Nancy Gorrell, were key players in organizing and facilitating the City’s official commemoration. (Picture of sunrise ceremony on Indigenous People’s Day, October 10, 1992; Mark Gorrell second from right). For many years, the Ecology Center has hosted the Buffalo Field Campaign, an ongoing effort to protect wild buffalo and raise awareness of their cultural and ecological importance. Today, the Ecology Center partners with myriad regional partners to stop the extension of fossil fuel infrastructure that threatens our land, water, air, and health – like coal terminals, oil by rail, and refinery expansion.

Just like us, millions of people have expressed their solidarity with Standing Rock. Join us in supporting this movement. Specific actions you can take are below.

[Excerpted from The Nation]

One thought on “We Stand with Standing Rock”