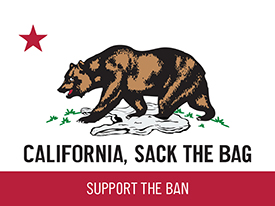 Last year, we celebrated a landmark environmental win as California became the first state to sign a bag ban into law. Now, the plastic industry has gathered enough signatures to put a referendum on the November 2016 ballot to overturn SB 270. They filed the paperwork last month, and more than 18 months away from election day, have already spent $7 million on the effort. This push is coming from out of state plastic companies, who report that plastic bags are a $100-150 million-a-year business in California.

What’s the take from actual Californians? Over 70 local cities and county governments have passed their own bag bans, and a poll conducted last year shows 60% of Californians are in favor of the statewide ban. The California Grocer’s Association also supported the statewide bag ban.

This issue is lining up to be another fight against a deep-pocketed group who will attempt to buy an election. Luckily, there’s a strong grassroots campaign that’s coming together to fight for 60% of Californians, and our watersheds, too. Check out California vs Big Plastic, which is the collective effort of groups like Californians Against Waste, Story of Stuff, and more.