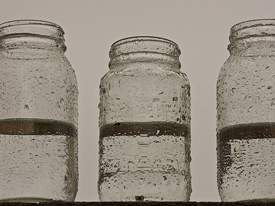 The news media, the governor, water agencies, farmers, urban residents, and even President Obama have all responded to the extreme drought. While this response is warranted based on available water resources, a recent blog post by Wholly H2O’s Elizabeth Dougherty points out that treating the drought like an exceptional weather event is inaccurate. Looking back at weather records, drought years prevailed 37 out of the past 100. Going back further, there’s evidence from tree rings that California experienced two prolonged droughts in the last thousand years, adding up to 370 years of drought. That’s a drought 37% of the time in both cases.

While the conservation efforts in a drought year are vital, a shift in our water management policies every year, every day, by everyone is important to reduce the risk of catastrophic droughts. These changes are possible, and with the drought there is a moment of political will for long-term solutions that won’t pit inland communities against coastal ones, or watersheds against farmers. In fact, there’s hope that more comprehensive policies are already underway, as proposed SB 848 has a $500 million component for stormwater capture and reuse. For additional models to follow, Dougherty’s post refers to a study that shows Australia has outpaced California in water conservation, through a couple straightforward policies. According to one Australian commenter, their average of 40 gallons per person per day would mean that the average Bay Area resident uses nearly four times as much water, with an average of 156 gallons per person per day. Especially in the urgency of this drought year, it’s vital to think long term about what makes a healthy, sustainable and equitable water system. That’s the scale at which changes to our climate are happening, and it’s also how we will be able to continue to support large urban areas and agriculture in our semi-arid state. The post brings this perspective and is worth a read.

And, if you’re still on the hunt for water conservation resources, tools and DIY strategies, our Environmental Info Desk is a great go-to. We were on KTVU’s Channel 2 evening news this week, for exactly that reason!

One thought on “Shift in Perspective: It’s a Drought 37% of the Time”