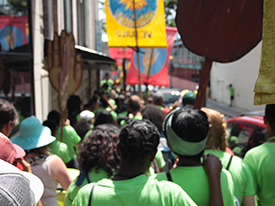 The Rooted in Community National Youth Leadership Summit is a conference for high school aged young people involved in the food justice movement. Every summer, the summit attracts over 100 young people from throughout the United States and Canada. Youth from across the country convene for five days to cultivate grassroots leadership, and strengthen the movement through skill building, co-learning, creative arts, and direct action. This summer, the Ecology Center sent three youth staff, Galen Folk, Jacquse Wyatt, and Raquel Aceves, along with an adult ally, Dante Alnas-Benson, to the conference. This transformative experience was made possible with support from Ecology Center members who donated during East Bay Gives – thank you!

Here are excerpts from their reflections about this trip.

GALEN FOLK:
A few weeks ago, myself and three other members of the Ecology Center’s Youth Program hopped on a red-eye flight, from San Francisco Intl. bound for North Carolina. Our destination was Bennett College, a historic Black school, (now an all women’s college) in the quiet town of Greensboro. For many of us this was our first time stepping foot in the South. The old brick lecture halls of the campus sat propped up by marble columns in neat arrangement on well manicured lawns, crowned by towering, dark trees who sang out with the calls of cicadas. This was our home for the duration of the Rooted in Community conference.

RAQUEL ACEVES:
In the first workshop I attended, I got to learn about an organization called Growing Change that is currently converting a defunct prison site into a sustainable farm and education center. Returning veterans who need job opportunities will take on leadership roles and help guide the program’s youth while learning sustainable farming techniques. Their work will also give them credits for a university degree in environmental science and sustainable agriculture. From their presentation, I was able to learn that many of the highways and roads in North Carolina were made by chain gangs, a group of prisoners chained together and forced to work. I also learned that North Carolina has high incarceration rates for the U. S. They even partnered with Duke University to create a virtual reality tour of the prison, which was really cool to see what the cells looked like before, and how the redesigned prison is going to look afterward.

JACQUSE WYATT
I really enjoyed the media team workshop where we learned about the 4 major social platforms: Facebook, Snapchat, Instagram and Twitter, and the different age groups that gravitate to them respectively. We learned how to get your story/promotion or advertisement across and how social platforms are incorporating advertisements on their sites.

RAQUEL:
In another workshop, our instructor had us listen to seven different songs and then draw what we heard or felt. I liked how, at the end, my paper looked like a mini mural. Later, there was the open mic, it was full of heart touching performances of dancing, poetry, and singing. I also liked our MC – she was really funny!
During the “Day of Action,” those who participated in the visual arts workshop got to help paint a mural in downtown Greensboro. The mural was meant to be a “love letter” to the city, with positive depictions of the community, but local citizens brought attention to the many problems in Greensboro, and the mural morphed into more of a “tough love letter” to the city. I painted the charred grass on the bottom that symbolized the negative history of Greensboro. I was able to leave a piece of me in that mural, and if I ever go back there, I can say that I helped create part of this beautiful painting that was once just an abandoned wall.

DANTE ALNAS-BENSON:
Being relatively unfamiliar with the area, I was excited to learn about the South through the lens of social justice, food justice and resilience; which was exactly what I learned about when our group from the Ecology Center went on a historical tour of Greensboro. Greensboro, like Berkeley and countless other college towns, has a history of youth folks organizing and advocating for change.
Part of our historic tour field trip was lead by Lewis A. Brandon III from the Beloved Community Center. Lewis told us the story of the A&T four from North Carolina Agricultural & Technical State University. On February 1st, 1960 four A&T freshmen students walked downtown and “sat – in” at the white–only lunch counter at Woolworth’s. They refused to leave when denied service and stayed until the store closed. The following day over 20 more students joined the sit in at Woolworth’s; our tour guide Lewis was one of those people. 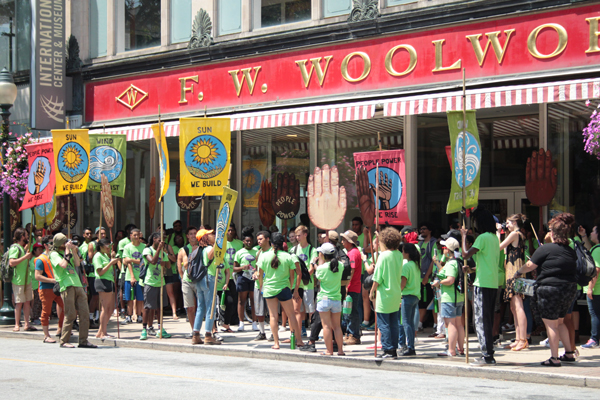 It was interesting hearing first hand accounts from Lewis about these actions in Greensboro. I think as a person growing up in California, the Civil Rights Movement seems like a series of events that are kind of just mixed together. Our history books don’t capture the magnitude of the Civil Rights Movement, the decades of activism, the conviction of entire communities, and (what I personally found very important) the engagement and commitment of young people in the movement. Having grown up in Berkeley hearing about the students from the university conducting the Free Speech Movement and hearing about the Black Panther Party (being mostly comprised of young folk), I’ve always felt connected to social justice movements led by youth. It was empowering to hear about youth uprising outside of my community, especially in a movement that had lasting impact on the rest of the country and the world. As many have noted before, the revolution will always be carried on the backs of the youth.
Earlier that same morning we took a walk in the woods behind Guilford College. Our tour guide James Shields (Director of Community Learning at Guilford) told us stories about the underground railroad and the history of Quakers in Greensboro. The Quakers were morally opposed to the concept of slavery and many Quakers took in runaway slaves on their way North. As James took us on a hike through the woods, he sang Negro spirituals, which he explained were a means of communication for slaves. Some spirituals would include hidden messages about escaping from slavery; these songs would be sung to slave children, engraving literal songs of freedom in their psyches from a young age. James took us to an ancient poplar tree overlooking a river. He explained how escaped slaves would walk up riverbeds, constantly bathing to remove their scent making them untraceable. As we walked back to the college campus James continued to sing. 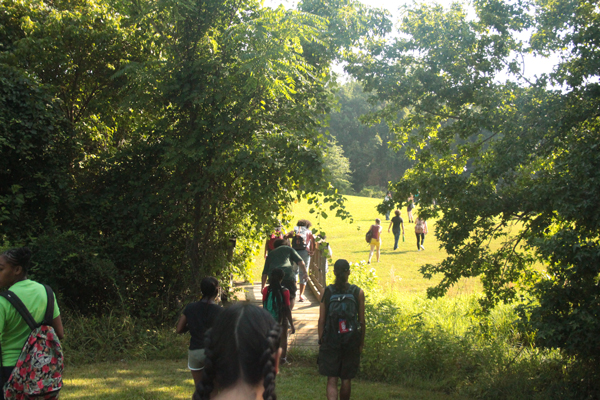 While we all learn about Slavery and the Underground Railroad as a part of American history during our school days, walking through those dense Southern woods that runaway slaves used to walk through gave me a more powerful understanding of their struggles. They would have to hide in the day and travel at night, following the stars and moss on the North side of the trees. It’s amazing to think that these people who travel hundreds of miles for their freedom. After walking a mere mile in humid Southern heat we found ourselves exhausted. James singing spirituals as we walked served as a reminder that the days of slavery aren’t far removed. Emancipation happened barely over 150 years ago. Walking through those woods put that all into perspective.

JACQUSE:
What I took away from RIC this year was the sense of power of community action. The social justice & poetry workshop was a great example of how community artists broadcast their messages to the rest of the city or nation using key elements such as awareness and perspective to bring attention to an issue they want recognized. I took away how a group of likeminded people can come together and create an agenda for solutions. I would want my friends, family, coworkers, and community to experience the overall knowledge that RIC offers from workshops, field trips, and the Day of Action.

GALEN:
I can confidently say that my experiences at RIC have been instrumental in allowing me to find my place in my own community, and in this world at large. As I continue to pursue avenues to further the cause of environmental and social justice, I’m grateful for the knowledge shared with me, and for the opportunity to hear stories from so many magnificent people with unique insights on what I hold important, and the connections I formed with people who inspire me.

DANTE:
RIC for me is many things, an extension of my community, a connection to the bigger picture, and a consistent source of inspiration; often a reminder of why I do the work that I do. While at RIC I’m physically distant from my family and friends, but RIC makes me feel much closer to those I care about. While this is not my first time at RIC, it was a new experience, new people, new places with so much more to learn. I encourage anyone working with youth or in the social justice or food justice movements to join our community and attend a conference. I’m thankful for being able to have these experiences and am looking forward to continue to build with the RIC community and to share what I’ve learned with my community here in the Bay Area.

One thought on “Rooted In Community: Youth Leaders Report Back”