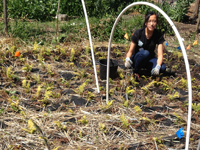 Several years ago, San Pablo Park neighbors organized to plant a community orchard in one of the grassy vacant lots that crosses diagonally through their neighborhood. The string of vacant lots is part of the Santa Fe Right-of-Way, an old railroad corridor that ran north-south west of Sacramento Street. Other parts of the Santa Fe Right-of-Way have been transformed into community assets like the Ohlone Greenway, Strawberry Creek Park, and Spiral Gardens.

When the soil was tested in preparation for the community orchard, heavy metals were detected. Decades of use as a railway left the soil compacted, with elevated levels of lead and arsenic. The City of Berkeley responded to this finding by cordoning off the vacant lots behind fences and locked gates. The community orchard idea was stalled, indefinitely.

In 2011, a group of neighbors, interested individuals, and nonprofits got together to forge a path forward. The question was: how can we deal with the high levels of arsenic in the Santa Fe Right-of-Way so that this valuable open space can fulfill its promise?

The Ecology Center partnered with the Pallud Soil Microbiology Lab at UC Berkeley, Berkeley Partners for Parks, Spiral Gardens, and The Berkeley Community Gardening Collaborative to apply for a grant from the UC Berkeley’s Chancellor’s Community Partnership Fund. The proposed project – the South Berkeley Bioremediation Garden and Public Education Project – was funded and is now underway.

Under the supervision of UC Berkeley Professor Celine Pallud of the Department of Environmental Science, Policy, and Management, Project Manager Anders Olson is planting Chinese Brake Ferns in order to remove arsenic from the soil in the Santa Fe Right-of-Way between Derby Street and Ward Street. Pteris vittata (Chinese Brake Fern) accumulates high densities of arsenic into its fronds. As the ferns grow, the fronds are harvested and disposed of, thereby decontaminating arsenic from the site. This summer, the Ecology Center intends to host free community classes on how to deal with contaminated urban soil, as an adjunct to this project.

Last fall, soil sampling the research group conducted at the site showed arsenic at levels of up to 100 parts per million and lead at levels of up to 240 parts per million. Olson prepared the site for the soil decontamination: a small tool shed was constructed, the project site was fenced in, and warning signs in English and Spanish were hung. The project site was tilled to homogenize the soil, and agricultural lime was added as a soil amendment. The soil was sampled prior to planting using EPA-approved protocol. As of April 10th, the research team has completed the planting of all 1600 Chinese Brake Ferns in the project area. The ferns are planted at a density of approximately one fern per square foot.

The research area is divided into four plots where the effectiveness of soil amendments on arsenic uptake is studied. The first plot is a control: no amendment is added other than agricultural lime, which was added to the entire project area to buffer the pH. In the second plot, compost is added. High-quality vermicompost (aerobic compost finished with composting worms) has been produced specifically for use on the research area. Composted horse manure from East Bay Regional Park Stables is also used in the second plot. In the third plot, nitrogen fertilizer is used. This plot is subdivided into two, with half of the area receiving an organic source of nitrogen in the form of blood meal, and the other half receiving a chemical source of nitrogen in the form ammonium sulfate. In the fourth plot, phosphorous is added to the soil. This area is also subdivided, with half receiving an organic treatment of phosphorous as bone meal, and half receiving an inorganic treatment of phosphorous as phosphate rock.

After initial tilling in the fall, each treatment was added. Now that spring is here and the ferns are actively growing, the amendments have been added again. During the growing season, the plots will receive amendments monthly. The ferns’ new growth should rapidly accumulate soil arsenic. Mature fronds will be harvested starting in June 2013. The fronds will be analyzed for arsenic extraction rates. The ferns will grow for at least two years on this site, and Pallud’s lab will monitor the results.

Thanks to Anders Olson for providing this update on the research project. If you’re in the neighborhood, stop by and take a look at the plot of ferns on the 1400 block between Derby and Ward. And keep an eye out for the Ecology Center’s Urban Soil Workshops coming this summer!