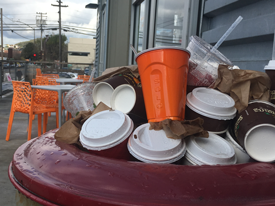 [Berkeley, CA] The Berkeley City Council will soon consider the Disposable Foodware and Litter Reduction Ordinance, the most ambitious and comprehensive piece of municipal legislation in the US aimed at reducing single-use disposable foodware.

The “Disposable-Free Dining” ordinance will get its first hearing at the April 24 Berkeley City Council Meeting. At 3pm that same day, Mayor Jesse Arreguin, one of the authors of the legislation, will join business owners, residents, and local, state, and national nonprofits to hold a press conference at the Berkeley Recycling Yard, located at 1231 2nd Street. Click here for the Press Kit.

“Single-use disposable foodware is a local and global problem, one with enormous financial and environmental costs,” says Council Member Sophie Hahn, the ordinance’s co-author. “As a city striving toward Zero Waste, we do a good job with composting and recycling, but it is not enough. We need to start reducing our waste as well.”

Berkeley’s proposed legislation builds on a wave of similar city ordinances, including in Santa Cruz, Alameda, Davis, Seattle, Ft. Myers, and Malibu, that have been passed in response to troubling global levels of plastic pollution.

Berkeley’s ordinance goes further than all prior initiatives, requiring that: 1) only reusable foodware can be used for dine-in service, 2) all takeout foodware must be approved as recyclable or compostable in the City’s collection programs, 3) food vendors charge customers $0.25 for every disposable beverage cup and $0.25 for every disposable food container provided, and 4) disposable compostable straws, stirrers, cup spill plugs, napkins, and utensils for take-out are provided only upon request by the customer or at a self-serve station.

According to a Clean Water Action study, food and beverage packaging comprise the majority of all Bay Area street litter. Bay Area cities are struggling to meet the Regional Water Board’s zero litter to storm drains requirement by 2022. Like other cities, Berkeley bears the cost of litter abatement – including the costly collection of debris from storm drains – as do the business districts. Last year alone, the Telegraph Avenue Business Improvement District’s street ambassadors picked up over 22 tons of litter.

“Our throw-away culture is leading to a proliferation of plastics in our food, air, and drinking water, which threatens human health and all ocean life. The solutions must focus on reducing the use of disposable food packaging that is the biggest contributor to the problem,” says Upstream’s Policy Director Miriam Gordon. “Globally, we’ve seen that charging consumers for plastic bags is the most effective way to shift people from disposables to reusables. The Disposable-Free Dining ordinance builds on that strategy.”

“Businesses that make these changes are often surprised at the cost savings and customer satisfaction when they move away from disposables,” says Samantha Sommer, who manages Clean Water Action’s Rethink Disposable Program. Clean Water Action’s survey of Berkeley food establishments revealed strong support for reducing disposable food packaging waste to address environmental impact. Though 74% of survey respondents used all disposables or a combination of disposable and reusable foodware in their operations, the majority of businesses would support legislation to charge for disposable cups (58%) and foodware containers (67%) if all businesses are required to charge the same amount.

Since January, China has ceased to accept US recycling contaminated with dirty, disposable foodware, creating a crisis in the recycling industry. “Most of the single-use plastic foodware has no value in today’s recycling markets. With China’s new ban on importing plastic scrap, cities are actually paying to get rid of it,” says Martin Bourque, Executive Director of the Ecology Center, the nonprofit that has collected Berkeley’s recycling since 1973. “Much of the low-grade plastic that now gets shipped to South East Asia may end up dumped or burned, despoiling their environment and poisoning workers. We cannot recycle or compost our way out of the disposable foodware problem. We have to focus on reduction.”

Single-use compostable foodware made from paper or fiber presents other environmental dilemmas. The thin, plastic coating added to make some compostable foodware impermeable contaminates composting operations. Other compostable foodware uses fluorinated chemical (PFASs) to create a grease and water barrier. PFAS are highly persistent synthetic chemicals, some of which have been associated with cancer, developmental toxicity, immunotoxicity, and other health effects. PFASs in food packaging can leach into food and increase dietary exposure, and also persist in compost after the container decomposes.

Berkeley’s Disposable-Free Dining ordinance builds on a long history of Berkeley initiatives aimed at phasing out products with high environmental costs, such as single-use plastic bags and polystyrene. The City of Berkeley is currently diverting approximately 75% of its discards and striving toward its goal of reaching Zero Waste by 2020.

The ordinance is supported by a coalition of over 1000 local, national, and international organizations participating in the Break Free from Plastic (BFFP) global movement, including the Ecology Center, Clean Water Action, UpStream, The Story of Stuff Project, Global Alliance for Incinerator Alternatives, Plastic Pollution Coalition, and Surfrider Foundation. BFFP Global Coordinator Von Hernandez, says,”The gravity of the global plastic pollution crisis should compel policy and decision makers to enact measures to reduce plastic waste, especially for disposable applications where viable and non-polluting alternatives exist. In this light, zero waste practitioners worldwide applaud and support this initiative from Berkeley and look forward to its adoption and implementation.”

One thought on “Press Release: Berkeley Legislation Aims to Curb Use of Disposable Foodware”