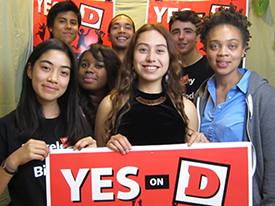 On March 28th, 2016 the Ecology Center released “Berkeley vs. Big Soda,” a short film that tells the story of how a community fought the powerful beverage industry to pass a tax on the distribution of sugary beverages.

The movie features campaign footage and is told by the diverse coalition members that coalesced to support Measure D. The campaign was led by individuals from communities most targeted by the sugary beverage industry – youth, Latinos, and African Americans. The Center for Disease Control says half of Latino and African American youth will get diabetes in their lifetime, and studies show that one serving of sugar sweetened beverages daily significantly increases risk of type II diabetes.

Emboldened by Berkeley’s successful Measure D campaign, many other cities, states, and entire countries are now considering soda taxes. Soda tax measures are marching forward in Philadelphia, San Francsico, Seattle, California, and the UK, while others are forming under the radar.

“‘Berkeley vs. Big Soda’ is an inspiration to others who are attempting to take on the deep-pocketed beverage industry to improve their children’s health,” says Xavier Morales of Latinos United for a Healthy California. “Berkeley won by winning over hearts – neighbor to neighbor, house by house, street by street. ‘Berkeley vs. Big Soda’ is a great primer for anyone interested in working to protect their children’s health.”

With “Berkeley vs. Big Soda,” the Ecology Center aims to show that soda taxes are a reasonable and achievable approach to the problem. We also hope to energize communities on the verge of launching their own campaigns and support others in the public health field who are grappling with how to stem the diabetes epidemic.

“Diabetes and other diet-related illnesses are destroying our kids’ health, and sugary drinks are driving this trend,” says Ecology Center Executive Director Martin Bourque. “With this film, we want to show that communities can fight back and win, even against a corporate Goliath.”

In November 2014, Berkeley became the first US city to pass a law taxing soda and other sugary drinks. In the first year, Berkeley’s soda tax has generated over $1.5 million for community nutrition and health efforts, including school gardening programs.

The Ecology Center has reached out to local, state, and national partners in the public health and political advocacy realm to circulate “Berkeley vs. Big Soda” widely, sharing it via social network channels, blogs, websites, and email lists. Already, the buzz is growing, with organizations from British Columbia to Texas promoting the movie. Just on Facebook, the film has reached over 8.5K views in its first 24 hours!

The film, made by nationally recognized filmmaker Helen De Michiel, is hosted on www.BerkeleyVsBigSoda.com. Once the active website for the Yes on D campaign, the site now serves as a resource for other communities interested in the soda tax strategy. It includes archived and recent news coverage on Berkeley’s soda tax; videos such as the soda tax short made by former Secretary of Labor Robert Reich; research on health impacts and industry strategies; and the impressive list of organizations, elected officials, and businesses that supported Measure D.