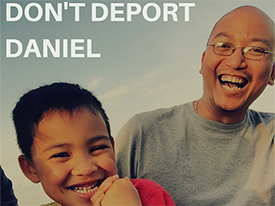 The US Immigrations and Customs Enforcement (ICE) has seized the Ecology Center’s Recycling Director, Daniel Maher, and is detaining him indefinitely under the threat of immediate deportation to China. Daniel has been an integral part of the Ecology Center for almost a decade, leading Berkeley’s curbside recycling program. Daniel immigrated from Macau when he was a toddler, and does not speak the language of the country to which he would be deported. What is happening to Daniel is unjust to him and to all those who love and depend on him. Anoop Prasad of the Asian Law Caucus (ALC) in San Francisco is handling Daniel’s case. Anoop is skilled in assisting individuals who have been detained by ICE in violation of their rights. Please sign this petition, urging his release.

The Ecology Center staff, recycling crew, and Board stand behind Daniel and want him released as soon as possible. He is an exceptional employee and a vital part of our leadership team. His expertise, kindness, and work ethic are unparalleled. Daniel is a skilled operations manager with deep technical knowledge and mechanical acumen. He is calm, fair, competent manager who engenders loyalty and respect. He is a beloved, intelligent, hardworking, generous friend and coworker, the first to get to work and the last to leave, always ready and willing to help people out.

The Ecology Center hired Daniel to run our Residential Curbside Recycling Program in 2006. He was the most qualified applicant for the position and has worked tirelessly throughout his tenure to develop and maintain an exemplary recycling program. We were aware of his immigration status when we hired him; he had a permit to work and was eligible for employment in the US, where he has lived most of his life.

According to the Asian Law Caucus, a crackdown on corruption in China is having devastating impacts on unintended immigrants. Since late 2014, the US and China have held meetings and agreed to coordinate repatriation and deportation proceedings for Chinese immigrants living in the U.S. China is seeking approximately 100 fugitives for corruption cases, mostly involving cases of people fleeing China in the 1990s. Since the start of 2015, it is estimated that about 680 fugitives suspected of economic crimes have already been deported to China. Immigration attorneys nationwide have seen a spike in ICE raids at the homes of Chinese immigrants, many of whom are not or were not involved in corruption crimes. Daniel, for example, was a baby when he was living in Macau and could not have committed crimes of corruption. These raids are excessive and over-inclusive, and tens of thousands of immigrants are being swept up in the dragnet.

Daniel and the other Bay Area detainees seized on June 2, 2015 were transferred from the ICE detention center in San Francisco to Yuba County jail. This trip took 24 hours, during which time the detainees were not provided any food or water. After 10 days at Yuba County jail, Daniel was transferred to the Adelanto Detention Center. During that 36-hour trip, the detainees were forced to sleep on concrete floors in unmarked buildings in seemingly random locations. Daniel’s Adelanto jailers discarded his medications. Since his arrival, he has repeatedly put in written requests to see a doctor at Adelanto. He has been without his medications for over 2 and 1/2 weeks now.

Ecology Center staff are regularly in communication with Daniel, though ICE makes it hard to track his whereabouts and hard for detainees to communicate with their families, friends, and legal representation with various actions including frequent relocations and long periods in which he does not have access to make phone calls, despite family and friends depositing money in a phone account for him to use. The Ecology Center has committed to regularly visit him, to ensure that we do not lose track of him, and ICE is unable to isolate him.

It is likely that Daniel’s record from over 20 years ago made him a target for ICE. At 19, Daniel fell in with the wrong crowd and participated in a robbery; he was convicted of a felony and served a 5-year prison term. He was held by ICE for another year and a half, then released. Daniel’s deportation officer wrote, “It [is] hard to see why he committed the robbery other than being very young and influenced by his peers…He is bright and seems committed to living a legitimate and law-abiding life if released. Mr. Maher should be considered for release.”

Daniel did not allow the dark chapter of his life to define him and has spent the past 15 years building a positive life. He is a valued and respected member of our staff. We are holding his job open for him, and need him back where he belongs, with his family, friends, and coworkers.

Please help us free our beloved coworker and friend. Sign the petition.