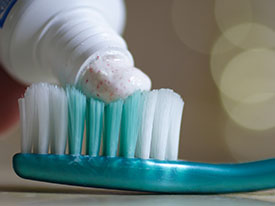 A new study by the San Francisco Estuary Institute shows that millions of pieces of plastic are entering the bay every day, contaminating wildlife and moving toxins up the food chain. At least 3.9 million pieces of plastic are coming into the bay daily from the waste water treatment plants. These tiny particles are coming from personal care products containing plastic microbeads (like face washes, scrubs, and toothpastes), and also plastic from synthetic clothing that breaks down when the clothes are washed. The waste water treatment plants are not designed to filter out these types of plastics, and the bay is more polluted than similar bodies of water that have been studied:

In the study, the first of its kind to broadly document pollution from “microplastic” in the bay, researchers dragged tight-meshed nets along the surface of the water in nine areas of the bay, from Oakland and Treasure Island to locations near San Jose. They found on average 1 million pieces of tiny plastic per square kilometer — an area of about 250 acres — at the water’s surface or a few inches below it in the South Bay, a concentration nine times higher than levels of similar plastics found in Lake Erie.

Meanwhile, the strongest proposed ban on microbeads in the country, AB 888, has been passed by lawmakers in Sacramento, and is sitting on Governor Brown’s desk. This new study brings home the local impact microbeads have, and will make the victory that much more meaningful when Governor Brown signs it into law. We also need to continue to put pressure on companies to find alternatives, and need far-reaching public education on the pollution caused by washing plastics down the drain, since the ban won’t go into effect until 2020.

For more, read this article from San Jose Mercury News.

[Photo by Thegreenj on Wikimedia Commons]