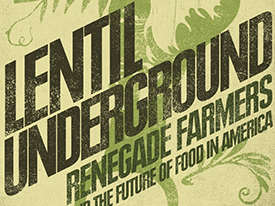 Lentil Underground by Berkeley author Liz Carlisle is the true story of a group of Montana farmers who launch a farm-to-table movement, developing lentil farming as a strategy to restore depleted soils while creating a market for an unlikely cash crop. By collectively sharing their skills, experiences, and resources, this diverse group of farmers venture into new farming terrain.

“Get big, or get out,” the mantra of Earl Butz, Secretary of Agriculture from 1971-76, still rules in the world of wheat farming in rural Montana. For farmers there squeezed by unpredictable weather along with depleted soils since Butz’s era, a new model was born out of necessity.

The farmer who took the first leap was David Oien. Starting with a small plot on his family’s 280-acre farm, David started a system of soil-replenishing, chemical-free, low-irrigation legume crops that season by season rebuilt the soil. Left shallow by years of intensive wheat crops, the soil became once again deep, rich, and loamy.

What was he planting? Organic black, caviar-like lentils.

While far from the restaurants of Seattle and other big cities, the lentils David cultivated had serious appeal, bringing chefs all the way out to Montana.

David Oien, along with the group of farmers who joined him to move away from expensive, chemical-intensive commodity crops are changing agriculture in a state the doesn’t change easily. Taken together, these farmers are a movement. The company that David and his partners have created, Timeless Natural Food, grows and distributes a wide range of organic, soil-enhancing, specialty grains and legumes.

A large part of the story Carlisle tells isn’t of farming, but of developing and marketing the lentil crop. Relying on too few customers caused setbacks when orders dropped or disappeared, so diversifying crops and customers became a full-time job for Timeless Natural Food directors, More by accident than by design, David and his partners created an industry.

Farming is a gamble. Organic farming, the way these farmers practice it, builds in some risk reduction in the long run. Including nitrogen-fixing plants like legumes in the crop rotation, and turning crops back into the soil as “green manure” provides self-sustaining fertilization. Saving seeds from crop to crop provides continuity, and seeds to sow, sell, or swap.

Organic growing along with seed saving are practices the Ecology Center supports on any scale. BASIL, the Bay Area Seed Interchange Library, is housed at the Ecology Center, open to everyone to use. We offer seed saving books as a reference, and books and supplies for you to purchase, as well as periodic seed saving classes and seed swaps.

Liz Carlisle will be bringing the story of David Oien and his partners to Berkeley on Saturday, May 23rd at 2PM, when she reads and discusses Lentil Underground at the Berkeley Public Library. In addition, Neil Thapar of the Sustainable Economies Law Center will talk about the legal issues facing gardeners who wish to save seeds, and we’ll be there hosting a mini-seed swap. Copies of the book will be for sale and signing, along with seed saving kits. Bring seeds of your own to swap, we hope to see you there! For more details, click here.

Description of “Lentil Underground” written by our Store staffer, Russ Harvey. A serious book enthusiast, you’ll often find him reading something new from our Store during his lunch.