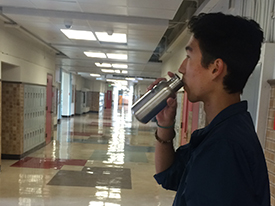 [Press Release]  As classes start this week, 700 students entering Berkeley High are going to school with free, stainless steel, reusable water bottles. Made by the Chico-based company Klean Kanteen, the water bottles were distributed at freshman orientation by Youth Scholars from the Ecology Center’s Youth Environmental Academy. This water bottle giveaway was funded by the Berkeley Sugar-Sweetened Beverage Tax, which voters passed in late 2014.

The water bottle giveaway comes on the heels of the installment of 8 new water bottle filling stations around the Berkeley High campus. Berkeley High School Development Group funded the new filling stations, which are mounted above existing fountains. Along with the bottles, the freshmen were given postcards that provide information on the health effects of sugar-sweetened beverages and alert students to the existence of these filling stations. “Measure D gives our community the power to counter the beverage industry’s marketing, which is aimed straight at our kids,” says Martin Bourque, Executive Director of the Ecology Center. “We are doing everything we can to change the environment to empower youth with tools and information to support the healthiest choices.”

In his marketing webinar entitled “Winning the Hearts and Minds of the Global Millennial Generation,” Joe Tripodi, Chief Marketing and Commercial Officer for Coca-Cola, said, “Vision 2020 is Coke’s plan to double its business by 2020… This aggressive plan is focused on dramatically increasing consumption of sugary beverages by young people using precision marketing that targets young people, mostly in Latino and African-American communities in the United States…” Berkeley’s City Council, under advisement by the City of Berkeley’s Sugar-Sweetened Beverage Product Panel of Experts, is using Measure D tax revenue to fund programs aimed at reducing the consumption of sugar-sweetened beverages in Berkeley and addressing the health effects of such consumption.

Berkeley’s soda tax was the subject of a peer-reviewed study that UC Berkeley researchers released last week. The study, which included a survey of residents of low-income Berkeley neighborhoods, reports a 21% decrease in consumption of sugary beverages, and a 63% increase in drinking water, compared to before the soda tax went into effect. “Not only was the drop in sugary drink consumption in Berkeley greater than we expected, the apparent shift to less harmful products like water is a very good sign,” said Kristine Madsen, the study’s senior author. National news media picked up the study, as an indication of Berkeley’s soda tax efficacy. Election campaigns are underway in neighboring Oakland, San Francisco, and Albany for voters to enact similar measures.