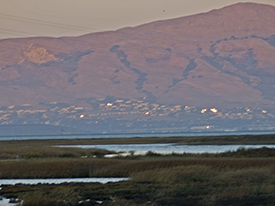 Bay Area’s Measure AA is a proposed measure on June ballots that will raise $500 million over 20 years to fund critical wetland restoration and flood-protection projects. Measure AA needs our help. More than 50% of voters use absentee ballots, which have already arrived in homes. Many voters have never heard of this measure and we need to get the word out. Please consider volunteering below and spread the word to your social networks via Save the Bay’s page.

What is Measure AA? It’s for a Clean and Healthy Bay

Measure AA, the San Francisco Bay Clean Water, Pollution Prevention, and Habitat Restoration Program, known as the “Clean and Healthy Bay Ballot Measure,” would raise $500 million over 20 years to fund critical wetland restoration and flood-protection projects. This measure needs 2/3 of Bay Area voters behind it, and every single vote counts.

Measure AA will fund wetlands restoration projects around the Bay that will:

Read more about Measure AA in this article from the San Francisco Chronicle.

With a small $12/year parcel tax spread widely, it supports wetlands projects that will protect our communities from predicted sea level rise, storm surges, and flooding as a result of climate change. Measure AA also brings other important benefits to support health in the Bay Area, including reduced water pollution, and beautiful shoreline areas for people to recreate alongside wildlife.

Now is the time to invest in climate change resilience strategies. This map from KQED shows how the predicted 55″ sea level rise will change the Bay Area by 2100: 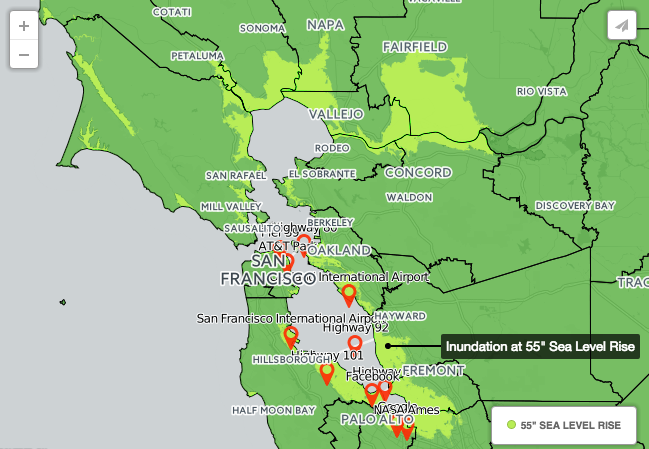 From Save the Bay’s blog:

“Scientists are urging acceleration of wetlands restoration to adapt to climate change now.

In late October, more than 100 Bay Area scientists released a long-awaited follow up to a 1999 report that assessed the health of the Bay ecosystem. That original report, the Baylands Ecosystem Habitat Goals, determined that a healthy Bay was dependent on at least 100,000 acres of baylands, or tidal marsh and flatland. Historically, the Bay had more than 200,000 acres; after 150 years of urbanization, however, that has been reduced to 44,000 acres – a decrease of roughly 80 percent.

The October report, The Baylands and Climate Change: What We Can Do, reiterated the need for wetlands restoration and called for accelerating these projects to guard against rising tides and flooding from extreme storms. The authors noted that failure to act quickly will cause the baylands to shrink, producing a number of devastating effects: We would lose the natural, cost-effective infrastructure that adapts to sea level rise and buffers our shorelines against storms; the loss of habitat would diminish the Bay’s diversity and abundance of wildlife; water quality could degrade, as the wetlands would no longer absorb excess nutrients and filter pollutants; and we would lose large areas of public access to the shoreline that currently allow us to enjoy the Bay’s beauty up close.

Fortunately, it’s not too late. We now have more than 30,000 acres of wetlands in public stewardship awaiting restoration. All that’s missing is the funding.”