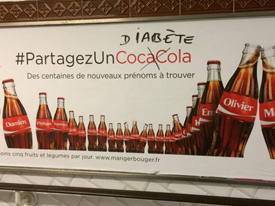 Berkeleyside, Berkeley Voice, and other local media have picked up on the story about Big Soda’s first move to bully Berkeley over its soda tax. Read on for our press release about the lawsuit.

Industry-funded opponents of Berkeley’s soda tax are suing the City of Berkeley over phrases in the Measure D ballot statement. The case will come before Judge Evelio Grillo of the Alameda County Superior Court on Friday, August 29th.

“No matter how many lawsuits Big Soda brings, they cannot escape the truth that their products are making our kids sick at epidemic levels. The industry simply doesn’t want to acknowledge the science and the statistics,” says Josh Daniels, BUSD school board member and co-chair of the campaign.

One of the plaintiffs who brought the lawsuit is Leon Cain, an Associate at Rodriguez Strategies, the LA-based PR firm hired by the American Beverage Association to fight Berkeley’s Measure D. He registered to vote in Berkeley on August 4, a requirement to be a plaintiff. He sued the city 10 days later. Initially, Cain sought to recruit an existing Berkeley resident to be named as plaintiff. He approached Jacquelyn McCormick, who is running for City Council in Berkeley’s District 8. “He wanted to know if I knew anyone who might be willing to put their name on the suit,” says McCormick, who declined because she supports Measure D. “I told him I didn’t think he could find a soul in Berkeley who would want to be part of the lawsuit.”

The second plaintiff, Anthony Johnson, is believed to be employed by Edelman, the San Francisco firm whose litigation communications group boasts of “preserving the reputation of the American Beverage Association when threatened with a childhood obesity lawsuit.”

“The opposition has spent hundreds of thousands of dollars on push polls, focus groups, and PR firms from LA. Now they’ve hired one of the most expensive election law firms in California to bully Berkeley with a lawsuit,” says Sara Soka, campaign manager for the pro-Measure D coalition. The tactic is familiar: two years ago, the American Beverage Association funded a similar lawsuit against El Monte’s proposed soda tax measure, alleging biased ballot language.

“Measure D is backed by a large, grassroots coalition of Berkeley residents who have been dedicated to the health of our children and community for years,” says Martin Bourque, Executive Director of the Ecology Center. “The sugary beverage tax will be on the ballot in November, no matter how much money outside corporate interests spend on frivolous lawsuits.”

To date, financial disclosures of donors for No Berkeley Beverage Tax have revealed only one major contributor: the American Beverage Association, which has donated $300,000.
[Image credit: A passenger on Paris metro snapped this pic, giving Big Soda a dose of their own medicine.]