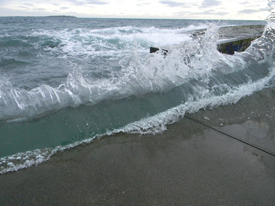 Do you ever wonder what sea level rise will look like? Winter high tides, or “king tides” give us a glimpse of our coast’s future with rising sea levels due to climate change. The king tides will be coming next week, Jan 29 – 31st, during the new moon. The California King Tides Initiative is asking people to head out during the high tides on those dates, photograph what they see, and submit photos as part of a citizen science effort. Anyone with a cell phone camera or digital camera can participate! It’s a great way to get out in your community, and see how climate change will impact where you live. How will these photos be used? Scientists and coastline agencies will be able to track changes over time, visualize sea level rise, and make plans for climate adaptation. Long term solutions can be developed that prevent flooding, erosion, loss of wetlands, and instead protect coastal land, homes and businesses and create new habitat.

Visit California King Tides Initiative at www.californiakingtides.org for information on this effort, and instructions to submit photos. In the East Bay, two king tides events include a walk on the Berkeley shore with Friends of Five Creeks, and Friends of Sausal Creek is offering a walk along the Oakland/Alameda channel.