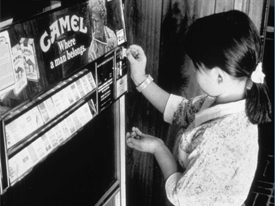 This morning when the proposed soda taxes in San Francisco and Berkeley were discussed on KQED’s Forum, a question came up: is there even one doctor who is against a soda tax? They are sure keeping quiet. In contrast, a long list of medical, dental, and health professionals are vocal supporters of the soda tax.

The consensus of research scientists and medical professionals marked an important tipping point in the health battle against tobacco and cigarette companies. Parallels between soda and tobacco have been touched on at previous events in the Soda Series. We’ve heard from doctors who went to work in the 80s treating health concerns related to smoking, who now go to work fighting diabetes every day. Lori Dorfman of Berkeley Media Studies Group, which studies the marketing practices of soda companies, is given hope looking at the image above. A child in the same photo as a cigarette vending machine is a blast from the past – because the campaign to tax and limit advertising and availability of tobacco was successful. Then there’s the money. We’re seeing what Big Soda is willing to spend to attempt to strike down these taxes. Between their marketing and their lobbying, Big Soda is spending millions to confuse the public and prevent action in the face of growing scientific evidence, just as Big Tobacco did before them.

This next event in the series Is Soda the New Tobacco? will bring speakers to talk about the parallels between these two fights for a healthier future. Speakers include Stanton Glantz, PhD, of UCSF, Mark Perschuk (former Director of Americans for Nonsmokers’ Rights), and Lynn Silver, MD MPH of Public Health Institute. Come join the conversation, Tuesday, October 7 from 6-8pm, with a reception at 5:30. For more details, click here.