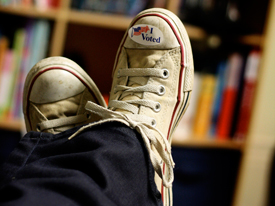 Tomorrow is the big day! Do your part, and go vote. Mid-term elections typically have low turnout (around 40%), but there are just as many important issues on the table. It doesn’t pay to sit them out. If you received your ballot in the mail, you can bring it to any polling location on Tuesday. Click here to find one near you. You can also use that site to check your registration status if you haven’t received a ballot.

What makes voting so important? The stakes have gotten higher in recent elections. Informed voters are the best shot to counter the imbalance of money in politics. The fewer voters who participate in elections, the greater the influence of corporations, who have ramped up spending since the Citizen’s United case was decided by the Supreme Court in 2010. Do your homework, and be sure to vote – don’t let our democracy go to the highest bidder.

Berkeley voters, join us in voting Yes on Measure D! We’re proud of this campaign to take a stand for health, and true to form, Big Soda has spent a ton to prevent the soda tax and influence our democracy. We know Berkeley voters are smart, and we feel ready for Tuesday. Do your part and vote, and we’ll be here on Wednesday working for a healthy, sustainable and just future – no matter what.