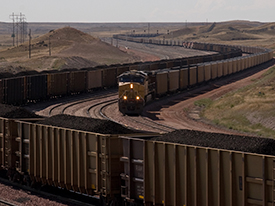 Oakland City Council is holding a hearing on the proposed plan to ship coal by rail for export through the Oakland Army base terminal. Environmental groups, including the Sierra Club, Earthjustice, Communities for a Better Environment, and West Oakland Environmental Indicators Project have all been speaking up since it came to light that the developers of an export terminal on City-owned land on the Oakland waterfront have been quietly soliciting a partnership with four Utah counties to export up to nine million tons of coal out of Oakland each year. Oakland’s City Council members have the power to stop this plan. We need to tell them that transporting and shipping coal, which exposes residents and workers to health-harming coal dust, is a bad plan for our climate, local economy, and health. It’s particularly concerning for West Oakland, the neighborhood next to the Port, that has for decades suffered from polluted air that’s led to high rates of asthma, cancer, and other respiratory problems. Attend the hearing and help stop this plan:

A recent article “Environmental Groups Say Oakland Can and Should Ban Coal Exports” from the East Bay Express details the danger of coal by rail, and the unacceptable response from the developers:

According to Earthjustice’s letter, coal is most commonly transported in open rail cars and stored in open piles. Dust from the coal pollutes the surrounding air, land, and water with toxic materials. The developers of the proposed coal terminal —including Phil Tagami of the California Capital Group and Jerry Bridges of Terminal Logistics Solutions — have claimed they can ship the coal in covered rail cars, and store it in covered silos, but the Port of Oakland rejected a similar proposal last year based on environmental concerns. Earthjustice’s letter notes that there are no covered rail cars currently shipping coal in the United States, and there do not appear to be any scientific studies on the safety of shipping coal via this method. Furthermore, the letter states that “there is no way to evaluate the efficacy of covered rail cars as a proposed mitigation, because the developer has not posted design plans for the facility or transportation infrastructure and there are no enforceable conditions in place for the facility or trains.”

Click here to learn more about Sierra Club’s local organizing on this issue.