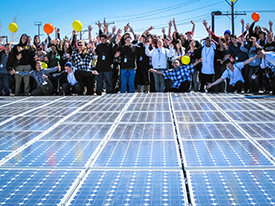 We are all for Community Choice Energy (CCE), which will be rolling out in Alameda County very soon. This model, which is growing rapidly in California, is a major gamechanger in the race to speed up our transition to renewables. CCE programs source a greater amount of renewable energy to power residences and businesses in communities they serve, compared to traditional utilities. This means fewer greenhouse gas emissions, cleaner air, and more opportunity for local, renewable energy jobs. Investor-owned utilities do not like this competition, and so they have tried, and will continue to try, to kill these programs through legislation. We need to take action to fight their latest unfair attempt to make CCE uncompetitive. Please support and defend Community Choice programs and local renewable energy projects in the East Bay and throughout California.

There are two very important bills in the California legislature requiring urgent action by all of us. Both of these bills are being heard by the Senate Energy, Utilities, & Communications Committee next Tuesday morning, April 4th.

Please join us by contacting your State Senators by 5PM on Friday, March 31st!

NO on SB 618 (Bradford)
Senate Bill 618 would tie the hands of Community Choice programs by putting approval of their integrated resource plans in the hands of the California Public Utilities Commission (CPUC), an agency that has demonstrated strong bias favoring investor-owned utilities against Community Choice.

Call the following Senate Energy Committee members this week expressing your opposition to SB 618 and your support for SB 692.

Sample Script: “Hello, my name is ______ from (org name or city) and I’m calling to ask Senator ________ to please oppose SB 618 and to please support SB 692 next Tuesday. I oppose SB 618 because it is a major threat to Community Choice energy programs and would interfere with their ability to be accountable to their local communities regarding resource planning. I support SB 692 because it would level the playing field for local renewable energy projects, particularly for Community Choice programs, while saving California ratepayers billions in future transmission costs.”

Copy, Paste, and Share this action alert. There’s power in numbers! It only takes a few minutes to amplify this important effort.