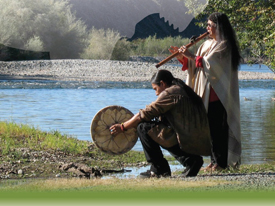 This evening will feature video presentation and storytelling with Mike Mease, co-founder and campaign leader of the Buffalo Field Campaign. We are also honored to be hosting special guest John Trudell, acclaimed poet, national recording artist, actor and activist. John Trudell (Santee Sioux) was a spokesperson for the Indian of All Tribes occupation of Alcatraz Island from 1969 to 1971 and served as the Chairman of the American Indian Movement (AIM) from 1973 to 1979.

There will also be special performance by fellow activists and First Nations musicians Good Shield Aguilar and Mignon Geli.