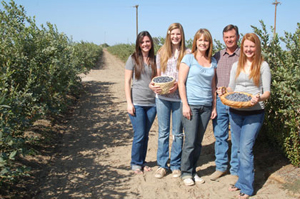 Triple Delight Blueberries, established in 1996, is located south of Fresno in the fertile San Joaquin Valley. Mark and Kimberly Sorensen named their farm after their three delightful daughters. As fifth generation raisin farmers, the Sorensens decided to plant five acres of blueberries to diversify their operation. Their initial plan was to sell the berries to a wholesale broker, but in 1998, the Sorensens began taking their blueberries to the Aptos Farmers’ Market. They were very quickly drawn to the fulfillment they felt by actually meeting the people who enjoyed their berries. Each year, their farmers’ market operation grew, and before long, they were able to sell their entire crop directly to consumers through markets in Central and Northern California. They love growing a crop that brings much joy to so many people, and look forward to the continued friendships they rekindle each year.


View Larger Map
Markets:South Berkeley (Tuesday)North Berkeley (Thursday)Downtown Berkeley (Saturday)Season:
May – JulyProduct: 7 varieties of blueberries including Reka, Star, Misty, Emerald, Oneil, Blue Ray, and LegacyFarmer's Name: Kimberly and Mark SorensenMailing Address: P.O. Box 206
Caruthers, CA 93609
Email: kim@tdberries.com
Phone: (559) 287-3965
Website: http://www.tdberries.comFarm Location:
Caruthers, Fresno County, CADistance From Berkeley:
200 milesSoil Type: SandyWater Source: WellAbout the Farm:
Mark & Kimberly Sorensen own Triple Delight Blueberries and work year-round on the farm. Because blueberry season is so short and busy, they need to hire a crew of 80-100 pickers. The picking crews go through the fields 3-4 times per week because the berries are not all ripe at the same time.Organic Certification: Partial land CCOF certified organicFertilizer: Triple Delight injects a commercial fertilizer through their drip irrigation system which contains a blend of several minor elements. They use an 80% organic and 20% food grade foliar feed.Weed Control: Hand hoeing, thick mulchingPest Management: Owl boxes, metallic tape for birds. So far, the Sorensens have experienced very little pressure from pests and use no pesticides.Acreage: 15 acres
Inspiring and building a sustainable, healthy, and just future for the East Bay, California, and beyond.