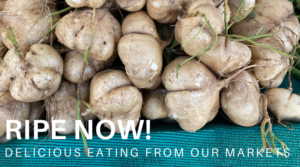 October 1, 2021 Edition
If you’re familiar with jícama (pronounced hee-kah-mah), the image that probably comes to mind is a cup of white, uniform matchsticks drizzled with lime juice and Tajín. Unfortunately, few recognize these tuberous root veggies whole. Native to Mexico, jícama are large and bulb-shaped, with thin roots protruding from its thick brown skin. Despite not being easy on the eyes, it has got a high fiber content and a starchy, Asian pear-like crunch that really forces you to question why you don’t seek it out more regularly. 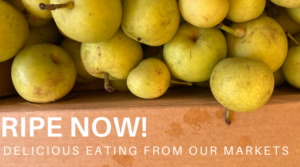 September 17, 2021 Edition
The days are growing shorter, leaves are taking on warmer tones, and the summer bounty is starting to fade away from our markets and palates. It’s easy to be bummed by the end of the bountiful fruit California summers bring us, but remember that there is a fall fruit inching into our markets to save us: Asian pears! 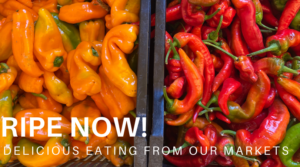 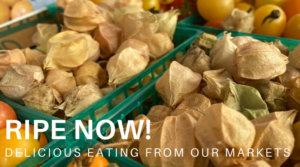 August 20, 2021 Edition
Pineapple tomatillos are nature’s individually wrapped candy. Also known as husk cherries and ground cherries, the name pineapple tomatillo definitely captures them best. They have a pineapple’s golden color and a slightly earthier take on its tropical-sweet flavor. And like tomatillos, they are in the nightshade family and have the kind of crinkly paper wrapping that our plastic-free market appreciates – minus the overly sticky texture! 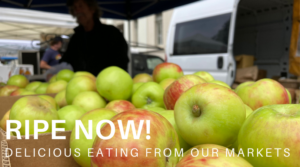 August 6, 2021 Edition
Apples?! Already?? Yes! In case you’ve never tried one, Gravensteins are an heirloom variety known far and wide for their top-notch flavor. Tart and hearty, their delicate, honey-sweet nectar floods the mouth with each bite. They ripen in early August, so they’re some of the first apples you’ll see at market each year. 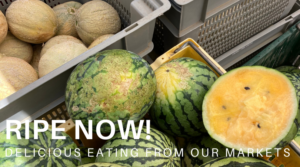 July 23, 2021 Edition
Melons have officially rolled into market! Sweet and hydrating, there’s nothing like taking a bite of a slice so big it requires both hands – especially on a hot day. The sights of market-goers smelling muskmelons and smacking watermelons in search of peak ripeness are also among the season’s best. 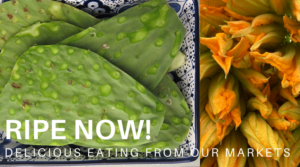 July 9, 2021 Edition
!Felíz verano! Happy summer! Farmers’ markets mean the opportunity to try something new every week — especially this time of year! While tomatoes and corn are definitely deserving of the summer spotlight, nopales, a.k.a. cactus paddles, and flores de calabaza, squash blossoms, are two hidden gems that are just as worthy of your taste bud’s attention. 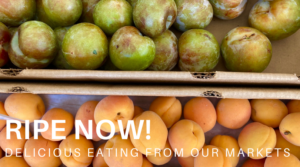 June 25, 2021 Edition
Happiness is a trip to the farmers’ market during stone fruit season! With glossy, red cherries and velvety, gold apricots in full swing, mottled-green pluots beginning to emerge, and the sun-kissed faces of market goers as blush and freckled as ripe nectarines, the market is at its most vibrant. 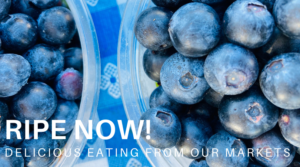 June 11, 2021 Edition
Plump, juicy, and somehow managing to strike the perfect balance between sweet and tart, blueberries are truly a wonderful treat. Their gloriously deep shade of indigo-blue is also stunning, not to mention rare in the food world. With sky-high levels of antioxidants – the most out of any common fruit or vegetable – blueberries can help us fend off major health conditions like heart disease, diabetes, and even some forms of cancer. They are truly superfood queens! Hence their tiny crowns. 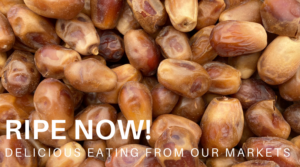 May 28, 2021 Edition
I’ve had all kinds of dates. Some a little rougher around the edges than others but, luckily, all sweet on the inside — just as they should be. Many attribute a date’s sweetness to the drying process a grape would undergo to become a raisin. But did you know a date is just a date? And that despite their sometimes tough skin, the ones you can find at a farmers’ market are actually considered fresh? It turns out that dehydration is actually a natural part of this fruit’s ripening process. While the clusters hang from date palms stretching up to 75 feet high, dates lose up to 80 percent of their moisture before they are harvested in fall time, leaving behind their signature concentrated, jammy goodness. 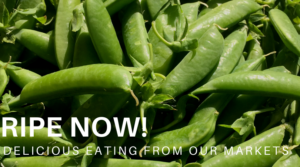 Are you a fan of crunchy textured vegetables? Do you want to bite into something fresh from the earth and hear that satisfying snap? Well, if the answer is yes, then this is a great time for you to shop at the Berkeley Farmers’ Markets, because sugar snap peas are ripe now! Sugar snap peas, also called simply snap peas, are edible pod-fruits, and are a cross between a garden pea and a snow pea. They have a nice bright green color and thick, rounded pod walls. Snap peas give you a wonderful crunch when biting into them and have a lovely, sweet flavor (hence sugar). 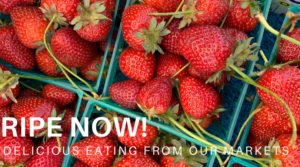 Strawberries are the first of the spring fruit to arrive at market. It always feels like they come just in time, as the winter season of citrus, apples, and pears are start to fade from farmers’ tables. There’s no denying the burst of flavor, sweetness, and texture you experience when you bite into a fresh, just picked strawberry from the farmers’ market. The large strawberries that can be found year-round at supermarkets are picked unripe and shipped. By the time they make it to the supermarket, they may look red, but they are pale inside, mushy, and disappointingly flavorless. Picked just when ripe, flavorful little crimson beauties now dot the farmers’ markets. 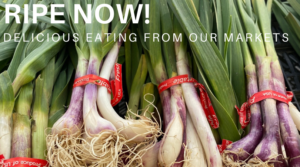 April 16, 2021 Edition
Spring has sprung, and so has spring garlic! Spring garlic, or more commonly referred to as green garlic, is simply garlic that is harvested before maturity. Green garlic has been used in cooking for centuries in Asia and Europe, especially in India. It started out as a secondary crop when farmers would thin their garlic crop, and, due to its popularity, has resulted in a niche delicacy in the culinary world! Now farmers solely grow this crop at an early stage due to its high demand. 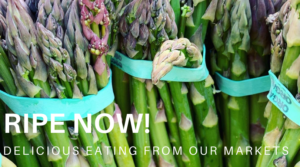 March 19, 2021 Edition
Signs of warmer weather are popping up all over the markets! We are lucky enough to live in a region where we can find locally grown asparagus.
Growing asparagus is a long and arduous process. Asparagus spears need to be hand-harvested one by one, and it takes two or more years for the first asparagus to appear after its seeds are sown. However, unlike most vegetables, asparagus is a perennial plant, which means the same plant will grow year after year, sometimes up to 20 years! 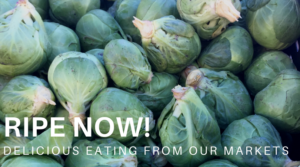 March 5, 2021 Edition
Brussels sprouts, the cute miniature-looking cabbage, are now in season at our markets, and we are excited about that! Brussels sprouts are in the brassica family, along with cabbage, cauliflower, kale, etc., and are native to the Mediterranean region, but were first cultivated in Brussels, Belgium (hence the name) in the 13th century. This vegetable was introduced to North America (Louisiana) in the 18th century by French colonists. Brussels sprouts have a green to purple color (depending on the cultivar) and are golf ball-sized bundles of leaves. They grow best in cooler temperatures, which is why you are seeing them in markets now. 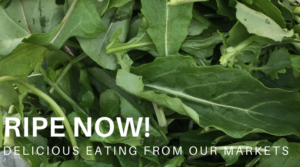 February 19, 2021 Edition
Hungry for some rocket? No, I’m not talking about space aviation. Rather, some spicy leafy greens. Arugula (also known as rocket in places like the U.K.) is a vegetable in the brassica family, alongside broccoli, kale, and cabbage. Native to the Mediterranean, Arugula was traditionally used as an herb, grown in gardens or collected in the wild. Now, it’s available widely in grocery stores and farmers’ markets, as well as grown in the wild in Europe and North America. 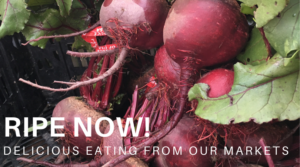 February 5, 2021 Edition
Sure the winter months don’t have fresh and tantalizing tomatoes and crisp and juicy peaches, but what about a little earthy and crunchy root vegetable goodness? These winter months are a perfect time to incorporate some more root vegetables into our diet, and one of those vegetables that is abundant at the farmers’ market is beets! Beets are a round root vegetable that has a leafy top. They were first cultivated in ancient Egypt, Rome, and Greece for their leafy greens. During the Roman era, they started to be cultivated for the root. The whole plant is edible and packed with vitamins and minerals, and affordable to boot! 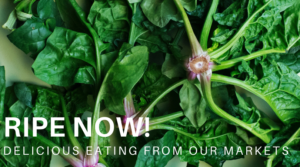 January 29, 2021 Edition
In the midst of the rainy season, cool-weather crops are thriving this time of year. One of those vegetables that we know and love is spinach! Native to Persia about 2000 years ago, spinach was then brought over to India and China and then became popular throughout Europe and the Arab Mediterranean. It is a member of the amaranth family (Amaranthaceae) and has a deep green color with ovate to triangular leaves. 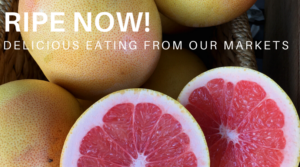 January 22, 2021 Edition
Looking for a fruit that is sour, sweet, and bitter all at the same time? Well, a grapefruit can be all of those things and more! Grapefruit is a hybrid between the sweet orange and the pomelo. It is a subtropical citrus that can range in taste from sour to semi-sweet, and somewhat bitter. Grapefruits have a yellow skin, and the pulp varies in color depending on the cultivar (from white to pink to red). Grapefruits do not resemble grapes, but rather got their name because they grew in a grape-like cluster. They have half the amount of citric acid as lemons or limes and about twice the amount of citric acid as oranges. 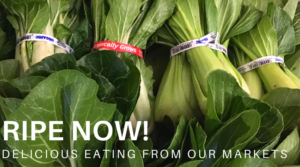 January 15, 2021 Edition
Looking to try out a new leafy green vegetable? Well, bok choy (Cantonese for “small white vegetable), also known as pak choi or pok choi, is at the height of it’s season! Bok choy is a winter-hardy green in the Brassica family. It is native to China since the 5th century AD and is a type of Chinese cabbage that is a popular veggie in Asian cuisine. Bok choy has a white or light green stem and dark green leaves and grows in a cluster. The texture is crisp and crunchy and has a spinach-like taste with a mild bitterness. 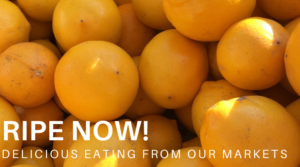 January 8, 2021 Edition
Want the perfect fruit to clear out 2020 from your system? Well, luckily lemons are pouring into the market right now to help you with that cleanse. Lemons grow on a small evergreen tree and are native to South Asia. The lemon tree can produce fruit year round, but produces the most fruit in late winter and early spring. You can find Eureka and Meyer lemon varieties at our markets. 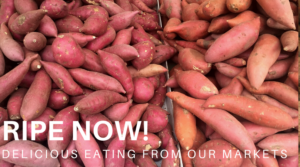 December 25, 2020 Edition
‘Tis the season to enjoy delicious meals surrounded by glowing lights and presents. And although this year we may not be able to get together with family and friends for the holidays, we can still enjoy the foods that feel like home. One vegetable in season right now that can bring that sense of comfort and goodness is the sweet and starchy sweet potato! 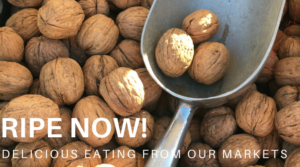 December 18, 2020 Edition
Did you know walnuts are not actually nuts? Much like almonds, walnuts are in fact the edible seed of a drupe (other common drupes include peaches, dates, and cherries). They have a multidimensional flavor: buttery richness from their high fat content, earthy and slightly sweet with a touch of bitterness from the tannins in their papery skin. 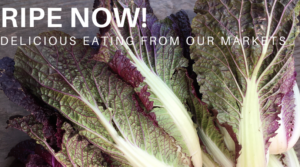 December 10, 2020 Edition
Sure cabbage is great, but have you experienced all that a napa cabbage has to offer? Napa cabbage is a type of Chinese cabbage that has it’s origins in East Asia in the 15th century. It then spread to Korea and Japan, and also became a popular crop in Europe, the Americas, and Australia in the 19th century. Fun fact: Napa cabbage is thought to have originated from natural hybridization of turnip and pak-choi. 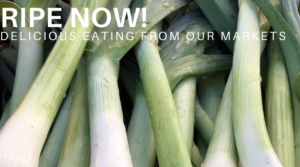 December 4, 2020 Edition
Looking for a veggie that’s not quite an onion and not quite garlic, but some sweet spot in between? Well, right now you can find an abundance of leeks at the farmers’ markets. Leeks are a part of the same genus as onions, garlics, shallots, scallions, and chives (Alliums). They are native to Central Asia, but have been cultivated for thousands of years. They have a sweet onion-like flavor and have a crunchy, firm texture.
Inspiring and building a sustainable, healthy, and just future for the East Bay, California, and beyond.

The Berkeley Farmers’ Markets are Expanding!

As the season and weather changes, summertime farmers are returning … Read more »