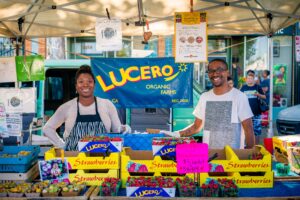 Ben Lucero describes farming as a constant learning process. He has been learning how to farm throughout his entire life. Raised in a farm worker family of Native American and Spanish descent, one of his earliest farming experiences was picking cotton alongside his parents when he was five years old.

He has always farmed with an ecological mindset. He started his first organic farm in the 1960s and has been selling at farmers’ markets since the movement took off in the 1980s. In 2006, Ben’s son Curtis returned to the farm, along with his wife Priscilla. Ben says that having their extra help over the past 5 years has been great! Four children and grandchildren also help out on the farm during summer vacation.