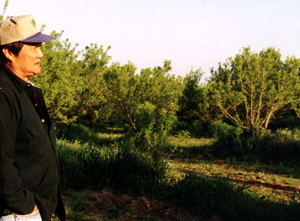 Steven Kashiwase is a third generation farmer. Steven’s father grew canning peaches and almonds conventionally until he passed away in 1976. At that time, Steven had just graduated from U.C. Davis with a degree in entomology and pomology, and he stepped in to oversee the family business.

At first, Steven continued to farm conventionally. However, in the late 80s, he diversified the orchards by planting some asian pears, plums, and nectarines, and he began selling through farmers’ markets. In 1990 he began to transition the entire farm to organic production, slowly converting one parcel at a time. Steven transformed his family’s farm from a conventional operation growing two crops, into a mixed orchard producing fresh fruits and almonds for farmers’ markets and a few retail stores. The entire farm has been certified organic since 1997.