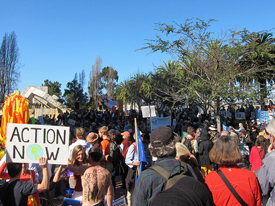 As heads of state from around the world gather in New York City for a landmark UN Climate Summit, hundreds of thousands of people will mobilize for the People’s Climate March. They plan to peacefully flood the streets as a “movement of movements,” uniting community based organizations, international NGOs, grassroots networks, faith groups, and others, together calling on world leaders to take bold, political action to address the climate crisis and create a clean energy economy that generates jobs for the 99%. The march aims to lift up the voices of people already feeling the impacts of climate change and pollution, from NY’s frontline communities who have faced the brunt of Superstorm Sandy to residents of Small Island States on the brink of disaster.

HOW CAN YOU PARTICIPATE FROM A DISTANCE?
Help plan or attend the Nor-Cal March: a family-friendly, high-energy call to action. In solidarity with New York, the Bay Area will host its own People’s Climate March, bringing together citizens, environmental and social justice organizations, labor groups, and others, organizing for a safe future and an economy that works for people and the planet. Here are the details:
What: Northern California People’s Climate Rally
Date: Sunday, September 21st
Time: 2pm – 5pm
Location: Oakland’s Lake Merritt Amphitheater (the new grassy area at the end of Lake Merritt near 12th Street, across from the Henry J. Kaiser Center, a few blocks from Lake Merritt BART Station.)

Create and post banners and posters in the weeks leading up to 9/21:To put more visual punch behind these events, the Sunflower Alliance and 350 Bay Area are producing People’s Climate Visuals—high-impact posters and banners declaring “Climate Action Now!” all across the Bay Area.

Organizers invite you to: get a poster from one of their distribution centers, or lend your talents to a bannering action.

Drop by the Ecology Center and contribute to our banner!
Throughout September leading up to 9/21, we’ll display a large banner in our central office. We invite you to come by, pick up a paint brush or marker, and express your hopes for a just climate future through words or images. On 9/21, we’ll hang the banner proudly, letting everyone know that our community supports climate action now!