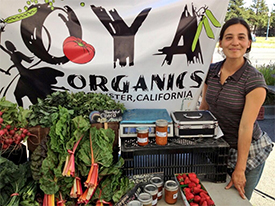 “Are you making a profit?” is a tough question for any farmer to answer, especially for a beginning farmer like Marsha Habib, a young woman of color who has overcome incredible odds to be doing what she clearly loves. Marsha answers honestly that at best it’s a break-even business, mentioning the challenges that come with purchasing expensive equipment, paying her workers, and leasing the land. Marsha’s farm, Oya Organics, is one of the newest diversified vegetable farms in the Ecology Center Farmers’ Markets, and the first of three farms in Hollister, CA on our recent farm tour. We also visited Roberto, Paula, and Eddie, the family that runs Golden Rule Organic Farm and Efren Avalos, operator of Avalos Organic Farm. Beyond geographic proximity and a connection to the Ecology Center, what these three farms have in common is that they are surmounting the centuries-old odds that have been stacked against farmers of color, women, former farmworkers, and aspiring farmers who do not have access to family-owned land or capital.

For example, Golden Rule Organic Farm was started by Roberto Gonzalez on a shoestring budget, after he was a foreman for a larger farm. He had the money to pay the lease on the 19 acres, but had to borrow $1000 from a family member for seeds his first year. Five years later, his wife Paula is starting a nursery project she hopes will bring more money and their son Eddie is in college with ambitions to learn how to expand the family farm. They each contribute to the farm while working outside jobs – like Paula’s at a local 99 Cent Store – to make ends meet. “Hard work” is an understatement for what it takes to farm. 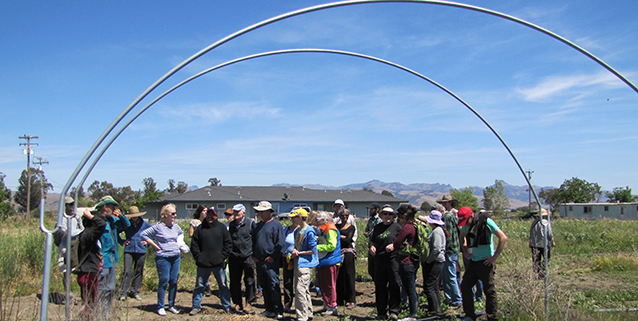 What constitutes barriers for beginning farmers is a complicated and sensitive topic, and includes some of the larger conversations around race and privilege that have been making waves this past year, both in mainstream media and around our office. As we discussed the topic with our farmers and participants during our event, a few themes emerged: historical policies and programs that have led to current land ownership patterns, the personal stories of why and how folks began farming, challenges faced by those the USDA calls “socially disadvantaged farmers,” and what we can do to reduce those challenges.

Who Owns the Farm Land?
According to the USDA’s 2012 Census of Agriculture, 60% of farmers are 55 or older, and only 14% are women. While there are an increasing number of people of color who operate farms, 97% of farming land is owned by white people. What follows is a brief overview of why farmers today are who they are: mostly old, white men.

This institutional racism ultimately leads to the largest class action lawsuit in history. In Pickford vs. Glickman, the USDA pays out $1 billion in 1999 to settle claims by black farmers who were denied loans between 1981 and 1996, or whose requests took up to three times as long as white requests, often after a harvest season had passed and folks were forced to give up their land. In 2010, an additional $1.2 billion is set aside for what is known as “Pickford II.” This money is for black farmers who were intentionally misled about how and when to make claims for reparation money in 1999. For more on this case and its significance, read this recent interview with John Boyd, the founder of the National Black Farmers Association, the group that spearheaded the legal challenge to the USDA. He also discusses the legacy and importance of farming to the black community. 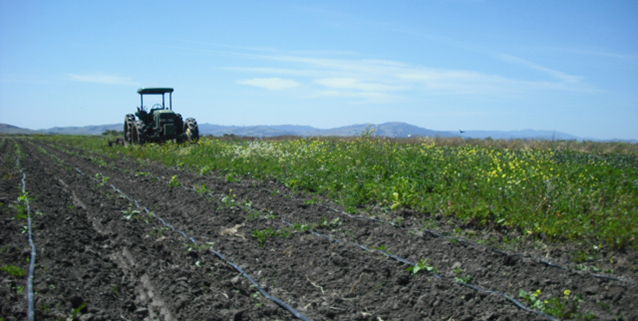 This history describes several programs that were established to support small farmers. But in each instance, farmers of color were not reached or intentionally excluded. Increased awareness of the inequity in these programs, and legal action to remedy the issue, have resulted in improvements for farmers of color, women, and young people, though unequal access to resources persists today.

Ecology Center staffer Dani Gelardi began thinking about this topic at the EcoFarm Conference earlier this year in Pacific Grove. Dani attended the Beginning Farmers Program track, paid for by the USDA Farm Bill’s Beginning Farmer & Rancher Program. “There was an incredible amount of information here, but when I looked around the room, it was only other white people learning with me. The EcoFarm Conference is not a particularly diverse racial community to begin with, and if the Beginning Farmer money is spent in places like these, you can see how it might not ever reach other populations.”

Dani is correct to identify outreach as one key to ensuring that government resources reach the populations who need them most. In the 2014 Farm Bill, the Outreach and Assistance for Socially Disadvantaged Farmers and Ranchers program was reduced, while the population it serves was expanded. In place since the 1990s, this program has helped countless historically underserved farmers, including farmers of color and tribal farmers, gain access to federal programs. It helps these folks gain access to federal credit, conservation, and rural development programs. The Farm Bill designates $10 million per year to support this program (roughly half of previous levels), while expanding the program to also serve the influx of returning military veterans who wish to pursue a career in farming.

Read more about what strengths and weaknesses the 2014 Farm Bill contained for these target populations from National Sustainable Agriculture Coalition’s blog. 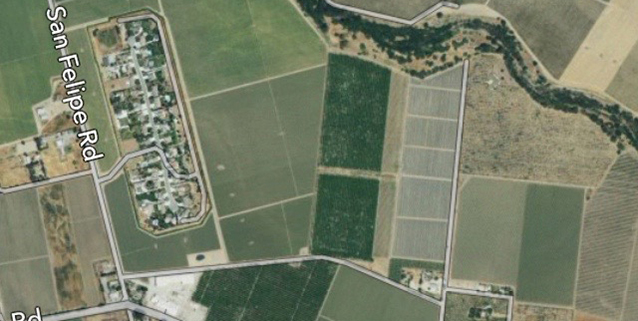 Aerial screen shot of area we visited in Hollister

The United States is entering a period of significant land transfer; an estimated 400 million acres will change hands in the next 20 years as farmers retire and sell or pass on their land. This is equivalent in size to the Louisiana Purchase and represents half of the farmland in our country.

At the same time, the price of farmland has skyrocketed, doubling in cost over the past ten years, and setting an even higher bar for most small farmers who don’t have access to significant capital.

This period of transition could lead to the further consolidation of land into larger and larger parcels. The land could also be purchased by investors who see agribusiness as a profitable investment, or turned over to developers in suburban and peri-urban areas. Read this piece from Tom Philpott on Mother Jones for more about the land grab underway that puts small farmers at a disadvantage.

This is a perfect storm of factors: land changing hands, non-farming entities with access to money to purchase it, and limited resources available to beginning farmers. Left as is, this combination will have dire implications in 5-10 years for the small or beginning farmers who grow our food, steward our land, and support jobs in rural areas.

In California the issue is particularly critical, as it’s intertwined with the drought and agricultural water use. Land that comes with access to unlimited water rights has higher market value, but incentivizes those landowners to practice unsustainable water use, like over-pumping groundwater or planting highly profitable but water-intensive crops like almonds. In a recent newsletter, Full Belly Farm’s Paul Muller raised this issue:

Agriculture that is making a profit attracts a lot of investor capital and non-farm entities that bid up farmland prices, sink deep wells, and exacerbate water scarcity by seeing permanent crops as an investment. Pension funds, hedge funds, insurance companies, and investor groups are all involved in the gold rush to nuts and they have the capital to put many new acres of historically un-irrigated land into production, with wells that tap into deep levels of water. This may be a fast race to the bottom and completely unsustainable.

There is hope, too. Eddie of Golden Rule Organics is representative of a new generation’s interest in farming. There were many participants on our tour who were along because of their own passion to pursue farming. In farm communities across the country, you’ll find clusters of young people who may not come from a farming background, but are interested in carrying this work forward. The challenge is for them to make it through several tough years before they can scale their operations to make a viable living. Some younger farmers are interested in the work because it’s inherently environmental, dealing with our food, soil, water, and climate. For people of color, farming can offer the chance to take part in a history otherwise stolen from them by institutional racism, land loss, and urban migration.

What Can We Do?
What can we do, as engaged citizens who would like to be part of a food system where beginning farmers, women farmers, and farmers of color thrive?

One solution is to carefully watch the next Farm Bill and advocate for the expansion of services and support for small scale producers. Policies that are small-farmer friendly are increasingly getting bipartisan support. In order to expand this support, together we can rally around the message that what’s good for small farmers is good for rural economies, the food system, and everyone. 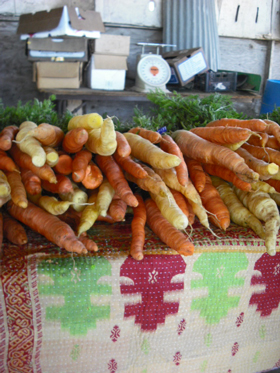 Another solution is to support local programs, like the Agriculture and Land-Based Training Association (ALBA), that work to lower the barriers to entry for beginning farmers in the Monterey County farming region. Efren Avalos started Avalos Organic Farm in 1998 after receiving training and resources from this program. Efren was no stranger to farming before going through ALBA – he had spent six years picking strawberries on someone else’s farm. And, his parents farm in Mexico, where he jokes that they practice organic farming methods but “don’t know they farm organic.” Efren’s story of transition from farm laborer to farm owner is one of huge success. He is thriving after over 20 years as one of the most beloved farmers in our market, and is an inspiration to other farmers with the odds stacked against them. ALBA serves as a model for what is possible when resources are focused on helping beginning farmers, with over 75 new farmers running their own farm thanks to their training program.

ALBA is also a partner with us on another resource, Market Match, that provides extra income to all three farms we visited. Market Match supports small farmers by directing food stamp benefits to be spent at farmers’ markets rather than corporate grocery retailers. Low-income families eat healthier, and more dollars are directed towards small farmers. In a survey of farmers served by the program in 2014, over half reported that they make more money and sell more fruits and vegetables as a result. Incentive programs like this received support in the 2014 Farm Bill and as a result, the Ecology Center was recently awarded $3.7 million to expand Market Match to more locations in California. You can read more about this program here. Programs like this can especially help beginning farmers, boosting their profits during their first years and help them more quickly scale up their operation.

Finally, we can support small scale producers most directly by shopping at farmers’ markets or through CSAs. These outlets best value the hard work of farmers by giving them a fair price for the food they grow, and through these communities we can build relationships to better understand the challenges farmers face.

This post was co-authored by Ecology Center staffers Leah Fessenden and Dani Gelardi, who organized the recent Ecology Center Members’ Farm Tour: Beginning Farmers. Thank you to those who participated and shared the day with us, and especially thank you to our farmers.

2 thoughts on “Barriers to Entry: Challenges and Resources for Beginning Farmers”