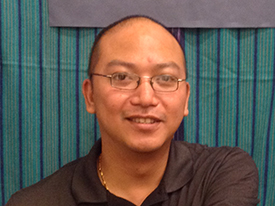 After months of being unjustly detained by Immigration and Customs Enforcement (ICE), Daniel Maher, Ecology Center’s Recycling Director, has been returned where he belongs – at home among family and friends, and at work in service to our community. Daniel was freed on Friday, August 14th, to much celebration and relief, after over two months of imprisonment. From June 2nd until August 14th, Daniel was under threat of immediate deportation to China. While ICE was attempting unsuccessfully to get those papers, Daniel endured several relocations to detention facilities all over the state. He was denied access to medication for weeks, and was also at times denied access to phones to update his lawyers and family on his whereabouts.

During the time of his detainment, the Ecology Center worked closely with Daniel’s supporters, including his family, his lawyers at Asian Law Caucus, and advocates at Chinese for Affirmative Action. Together, we gathered widespread attention to Daniel’s case, launching a petition for his release that got over 3100 signatures. We staged press conferences, and his story made it to national media. We held a rally in front of ICE in San Francisco. We reached out to elected officials like Berkeley Mayor Tom Bates and Alameda County Supervisor Richard Valle, who wrote letters to ICE, asking for Daniel’s release. We thank those who read Daniel’s story, signed his petition, shared on social media, and helped put pressure on ICE to release Daniel.

Daniel was targeted as a “high priority” for deportation, since he has a record from a crime committed over 20 years ago. ICE categorizes all immigrants with this type of background as a threat – without consideration for their full story, which in Daniel’s case is of a person who made one mistake as a young adult, served his time, and then completely turned his life around. He is an asset to all who know him. Professionally, Daniel oversees the curbside recycling program for the community, helps the City of Berkeley reach its Zero Waste and Climate Action Plan goals, and offers education to the public on recycling through tours and events, and leads a unit for at-risk youth through our Youth Environmental Academy. ICE is making our communities less safe by ripping people like Daniel out of their homes and jobs.

We are immensely relieved to have Daniel back with us. He’s focused on picking up right where he left off: “Since my return, I have renewed many connections and have looked forward to spending time with family and loved ones. I am especially thankful to those who have worked so hard for my release.”

There is still uncertainty in Daniel’s future. As reported recently on NBC and KQED, at any time, ICE could try to get papers and negotiate with the Chinese officials, snatching him away from those who love and depend on him. The best way to guarantee Daniel’s ability to live his life free from the threat of deportation is to get an official pardon – which means getting Daniel’s story to Governor Brown.

One thought on “Recycling Director Daniel Maher has been freed – Welcome back!”