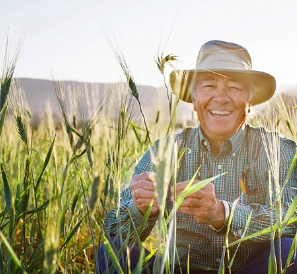 After serving in the army, Larry graduated from Fresno State University in 1970, with a double major in mechanical engineering and agriculture. After less than a year of working on the first space shuttle (turned out he hated working in the aerospace industry) he turned to agriculture and became an assistant production manager and engineer on 57 ranches in Central California.

By 1977, Larry moved to Fresno to start his own operation. He wanted to grow echinacea and became the largest grower of the medicinal plant in Fresno. He was affiliated with the California Certified Organic Farmers Foundation in Fresno, and always leaned towards organic practices, minimally tilling the land. In 1999, Larry bought the 130-acre property he currently farms in Los Osos, CA. Larry also grows wheat, barley, rye, millet, teff, sorghum, and legumes in the winter – much of which are dry farmed (not irrigated except for rain and moisture in the soil). He also grows lentils, peas, fava beans, fenugreek, and beans of all kinds in the summer, which are also irrigated by movable, lateral sprinkler lines. There are often 70 different varieties of crops on his table at the farmers’ market, and 1,000 crops on the farm.