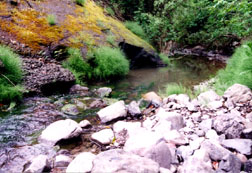 The 200-member group is currently working on several restoration projects including dam removal and fish rescue. The East Bay Regional Park District will begin the first Alameda Creek dam removal project on August 17, 2001 in Sunol Regional Wilderness. The Park District will begin removing two low-swim dams in Alameda Creek which are barriers to fish movement at lower flows. The 3-foot high dams will be removed and the streambanks restored and re-vegetated by the end of summer 2001. The group’s fish rescue efforts include hand-moving steelhead trout above dams and constructing fish ladders and screens. Fish ladder construction and dam removal projects in the flood control channel and Niles Canyon are scheduled to be completed by 2003/2004, allowing ocean-run steelhead trout to access the upper creek in Sunol Wilderness for the first time since the 1950’s. [according to press release].

The FOAC has a dedicated core member group of 6-10 people, with a larger volunteer group of about 30, in addition to the Martinez Junior High science department.

One of the group’s recent successes involved working with the city to get funding to redirect the creek through a former parking lot, helping to reduce flooding. The FOAC have been working on several other flood control projects as well. They recently widened the floodplain area around the creek and put in several parklike areas around the banks to help decrease erosion.

The group also has two ambitious projects planned. They are working with other groups including the County and the National Park District to divert the creek into a meadow site on Strenzel Lane in order to reduce flooding that threatens John Muir’s grave site.

The FOAC are also working with the Alhambra Creek Watershed Planning group and have just completed their watershed plan after a 4 year drafting process. According to co-director Shirley Skaredoff, the plan, due out in April, is the result of a collaboration among diverse interests including government agencies and other organizations. Skaredoff said the best part of the collaboration was finding that so many diverse groups could work together.

In fall and winter 2001, the group is restoring approximately 1000 feet of Cerrito Creek adjacent to Pacific East Mall, working with the mall owner, Urban Creeks Council, and the East Bay Conservation Corps. In summer 2002, members expect to take part in restoring another 800 feet of Cerrito Creek, adjacent to El Cerrito Plaza, this time working with the City of El Cerrito. With a $100,000 grant to the City of Albany, the group is part of planning a trail that will follow the creek from the Ohlone Greenway (BART right of way) to Pierce Street, with a link to the Bay Trail.

Preliminary feasibility studies have been completed for expanding Albany Salt Marsh west of the freeway on Golden Gate Fields property, at the mouth of Cordonices Creek. This area is the last remnant of a large marsh that once stretched along the entire shoreline.

FO5C is also working with the University and the cities of Berkeley and Albany to restore about a half mile of Codornices Creek adjacent to University Village, from San Pablo Avenue to the railroad tracks, with a creekside trail. The group already has extended an existing trail another block, so you can now stroll along Codornices Creek from 10th to 8th Streets, south of Harrison Street.

Friends of Five Creeks has regular work parties to remove invasive non-native plants, plant native plants that are more friendly to wildlife, control erosion, build trails and other amenties, and pick up litter.

In addition to restoration, the group also does water monitoring in Cordornesis and Cerrito creeks. They have installed "data loggers" in the creek, which record conductivity, temperature, and flow. The group also does coliform testing with the help of the US Environmental Protection Region 9 lab. The group works with school children, conducts an annual frog survey, and plans to start regular bird surveys on Cerrito Creek soon.

The group also recently began working with the City of Oakland to plan a native plant nursery in Joaquin Miller Park. FOSC feels they are receiving wide support for this project, both within City government and from the public. Their goal is to create a site that can serve both as a nursery to grow native plants for future watershed restoration projects and other City revegetation projects, and as an environmental education center. The group hopes to work with Chabot [Regional Park] to create educational programs and provide horticultural training for youth in Oakland. According to their newsletter, the group’s public meeting on March 7 was "well attended," and they hope to present their proposal to the Oakland Parks and Recreation Advisory Commission in the next few weeks.

The City of Oakland also has a major channel restoration project planned on Sausal Creek late this summer, and according to the FOSC newsletter, this project will be "the first of its kind to occur on an Oakland creek." As of now, the creek does not have a floodplain along most of its length because it has been straightened. The structures used to straighten the creek are now deteriorating, causing erosion of the creek’s banks and bed. Invasive nonnative plants have also become prevalent along the creek and are "greatly reducing plant and animal diversity." The Alameda County Flood Control and Water Conservation District and the California State Coastal Conservancy will provide funding for this project.

The group was formed last May "to Protect San Pablo Creek watershed and inspire community education and stewardship through habitat restoration and advocacy education." The SPaWNERS have set up a restoration center at El Sobrante Library–the only part of the creek on public land—to remove the invasive nonnative Nigerian ivy and to revegetate native plants. The group has prioritized "native plant gardening, hands-on habitat restoration, outreach to schools (including DeAnza high, Richmond High, East Bay Waldorf, and Juan Crespie Middle school); and the elimination of dumping. The group also has formed a "Newt brigade," in which volunteers go out every night and help newts cross the road by hand. The group initiated frog monitoring and monthly water quality monitoring programs as well. Their most recent accomplishment is their Earth Day project, in which they enlisted volunteers to help revegetate the creek with native plants.

The Friends of Baxter Creek have 20-30 active members with a mailing list of 700. Volunteers include 150 children from a local elementary school and a local Girl Scout troop.

The FOBC’s latest project is a partnership with Urban Creeks council to restore 1000 feet of creek in Booker T. Anderson park, which is in an urban, low-income area near 47th and Carlson Streets in Richmond. The restoration project has included naturalizing and revegetating the creek. Students from Stege Elementary are playing an integral part in the revegetation process, growing willows to plant along the banks. The ribbon-cutting ceremony for the park took place on April 21st.
The FOBC also wrote a successful grant proposal to acquire land in El Cerrito for creek restoration. The land, owned by the City of El Cerrito, connects the Ohlone Greenway with the Richmond Central Greenway near the train tracks.
The group’s meetings are education-based to complement the hands-on work of the creek restoration, and they include speakers and brainstorming.

SUCC has a membership of about 100, with a 12-member board of directors.
The group is in the midst of Creek Week, its main event for the year. The "splash-off" took place on April 27th, and the creek cleanup is on Saturday, May 5. One to two thousand volunteers will clean roughly 50 creek sites around the county, removing garbage and invasive plants. Students from Folsom School will also be removing water hyacinth in Willow Creek.

Currently, one of SUCC’s main projects involves removing invasive nonnative vegetation from the creeks. The bushy, invasive plant Red Fesbania is choking willows and displacing water in creeks around the county, and the group’s volunteers are kept busy removing the plant’s large seedpods from trees and sandbars.

The group’s other main focus is education. Members educate people about water runoff and flood control, and they also have a "creeks curriculum" to help elementary school teachers learn to use the creeks for teaching science.

Recent successes include a campaign to save a city-owned 7-acre wetland area along I80 from being sold to a company for industrial use.

In addition to creek restoration, education, and the occasional campaign, the SOCC also works at the watershed level. They put on a workshop in November called "building dialogue for urban watershed planning." They got as many interests together as possible to talk about ways of improving the watershed and raise awareness.

Walnut Creek Friends of the Creek

The FOWC’s annual cleanup typically draws 300 volunteers, with smaller volunteer groups of 5-60 people, including Boy Scout troops and students from UCB Extension, Athenian School, colleges such as UCSF and UCSC, and other schools in the city of Walnut Creek.

Currently, the FOWC’s main project is the removal of Arundo donax ("giant reed"), an invasive weed in San Ramon, Las Trampas, and Walnut Creeks. Arundo uses up 2 to 3 times as much water as native plants, and Romo states that if the city of Los Angeles could eradicate Arundo along the Santa Ana river, it could provide water to 100,000 more homes. The plant also increases water temperature, altering the habitat for native plants and animals. The group has hired an herbicide applicator to remove Arundo along Walnut Creek.

In addition to restoration, the group is organizing a watershed forum with agencies throughout the county to discuss ways to create a watershed group in Contra Costa.

The group’s future plans include creating a continuous path for wildlife to move from the Las Trampas open space along the creek to Mt. Diablo—a challenging task, since the creek is in an urbanized area. Just recently, Romo says, a coyote became trapped in a culverted creek by a shopping center and had to be rescued; FOWC hopes to eliminate this problem.

The group’s annual creek cleanup will be held on Saturday, May 12, and they plan to remove trash and Arundo.