VIDEO CLIP: Arturo Rodriguez is the President of the United farm Workers Union. He talks about what César Chávez has taught us, and urges that we commit ourselves to something and experience the fruit of that commitment. (100 seconds, edited from Song For César)

VIDEO CLIP: Dolores Huerta is the co-founder of the United Farm Workers Union. She emphasizes three important steps to internalizing the legacy that César left. Each individual has the power to make change. (97 seconds, edited from Song For César)

CHAVEZ SPEAKS (mp3, 2.8 MB): A two-minute excerpt from a speech delivered to the Commonwealth Club of San Francisco in 1984. The excerpt addresses the sins of growers with respect to environmental toxins. The speech covered the struggles and achievements of the United Farm Workers Union.

VIDEO CLIP: Paul Chávez is the son of César Chávez. He makes the point, particularly for children, that we have to look to ourselves. There is no savior coming from the outside. Each of us has a contribution to make. That is César’s legacy. (76 seconds, edited from Song For César)

VIDEO CLIP: In Defense of Animals gave its prestigious Lifetime Achievement Award to Cesar Chavez. The award has been given to a list of esteemed winners including the late David Brower and the eminent Dr. Jane Goodall. (Acceptance – 3 minutes)

“Kindness and compassion toward all living things is a mark of a civilized society….Racism, economic deprival, dog fighting and cock fighting, bull fighting and rodeos are cut from the same fabric: violence.”

VIDEO CLIP: Julie Chávez Rodriguez, granddaughter of César, and Paul Chávez talk about César’s love of music, and contrary to what one might expect, his passion for Jazz. (71 seconds, edited from Song For César) 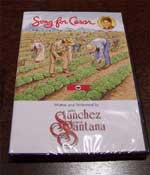 More than two years in the making, The Fight in the Fields: Cesar Chavez and the Farmworkers’ Struggle is the first film to cover the full arc of Cesar Chávez’ life. Using archival footage, newsreel, and present-day interviews with Ethel Kennedy, former California Governor Jerry Brown, Dolores Huerta, and Chávez’ brother, sister, son and daughter, among others, the documentary traces the remarkable contributions of Chávez and others involved in this epic struggle. Produced, directed, and written by Rick Tejada-Flores and Ray Telles, The Fight in the Fields is a presentation of the Independent Television Service (ITVS). The film was produced by Paradigm Productions. The documentary premiered at the Sundance Film Festival in January, 1997, aired across the nation on PBS from 1997 through 2000, and on the Sundance Channel in 2001 and 2002. Downloadable High School Study Guide Available

A look at the man who was at the center of one of the great social movements of the 20th century. In 1948 Cesar Chavez was a "fruit tramp" migrant worker. Within 20 years he had become a great labor leader, constantly on the front lines of the struggles of farmworkers for dignity and union recognition. This video covers Chavez’s participation in strikes and fasts and his strategies for gaining recognition for workers, particularly the Californian grape workers in the 1970s and his 36-day fast in 1988 to stop carcinogen pesticide use in vineyards when workers were picking crops. When Chavez died in 1993, 30,000 mourners came to the funeral of this hero of the common people. A video every worker and employer should see. Good information and production quality. Age level: Grade 7 & up (study guide available).

The final documentary in the career of broadcasting news legend Edward R. Murrow. Originally aired on CBS Reports in 1960, this controversial documentary shocked viewers with its stark images of desperate poverty and the callous greed of big growers. It forever changed the nature of TV news and set the tone for a generation of investigative journalists.