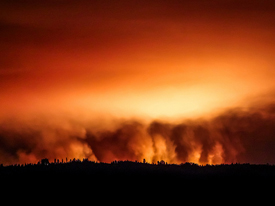 It’s reassuring to think of climate change as happening somewhere else, preferably in places where you have no contacts, no history, and no plans of visiting. The less personal, the easier it is to look the other way. Last year, millions of people weren’t given the option of turning a cheek as Superstorm Sandy barreled up the East Coast and devastated homes and infrastructure across New Jersey, New York, and New England. The Rim Fire ravaging the Sierras is now bringing climate change home to many Californians in a similar way.

For over three weeks, 370 square miles of one of North America’s most treasured landscapes — Yosemite National Park — have been caught in the state’s fourth largest wildfire on record and the biggest in the Sierras’ history. It’s an area the size of more than seven San Franciscos. Scores of redwoods were obliterated in the inferno, wildlife such as deer and owls were wiped out, and dozens of buildings were burned down. Tragically for many in the East Bay, the beloved, 91-year-old Berkeley Toulumne Family Camp was almost entirely destroyed as the fire swept through, burning most of the camp’s 80 buildings. Air quality was also compromised in parts of California and Nevada, causing schools to shut down and cities to issue emergency alert warnings, urging people to stay indoors. While we along the Bay might be spared the harshest consequences of this fire, as with the flames themselves, the effects of a wildfire of this magnitude don’t stay in one place.

Most notably for Bay Area residents, about a week into the fire, the shores of the Hetch Hetchy reservoir, well known for the pristine water it provides to 2.6 million people, were hit. Hydroelectric power in the region was also threatened. Responding to the threats to utilities, at one point, Governor Jerry Brown declared a state of emergency for San Francisco — 150 miles from the fire itself. The price tag attached to fighting the fire has also been alarming, costing $81 million as of this past Thursday.

Many of those costs can be attributed to climate change. The Nobel Prize-winning Intergovernmental Panel on Climate Change assessed the risks of extreme weather events, and found that “Extreme impacts can also result … from a compounding of events or their impacts. For example, drought, coupled with extreme heat and low humidity, can increase the risk of wildfire.” That’s why the draft National Climate Assessment report released earlier this year warns that the hot and dry conditions associated with climate change will result in more frequent and severe wildfires in the Western US. Population growth means the stakes — costs in lives, money, property, and time lost — are getting higher. Worse yet, climate change and wildfires reinforce one another. For instance, in Arctic regions, fires affecting carbon-heavy peat can release tremendous amounts of greenhouse gases into the atmosphere, fueling climate change.

Forest fires are not inherently bad. In fact, they can play an important role in maintaining the health of an ecosystem by clearing dead wood from the forest floor, thereby improving the habitat for both plants and animal life and, ultimately, increasing biodiversity. However, changing land use patterns, coupled with drought, create ripe conditions for uncontrolled, sweeping wildfires like the one taking place in Yosemite, and climate change only makes these problems worse.

This is why the Ecology Center and our partners in the Berkeley Climate Action Coalition are working hard to reduce Berkeley’s contribution to climate change, and to protect our region from the dangers climate change poses. We’re working to become more efficient with the water we use so that we can reduce strain on our local reservoirs, to reduce our city’s electricity demands, and to find ways to be less dependent on the dams and farms of the Sierras and the Central Valley. We may not be able to prevent climate change entirely, but we can be ready for it.