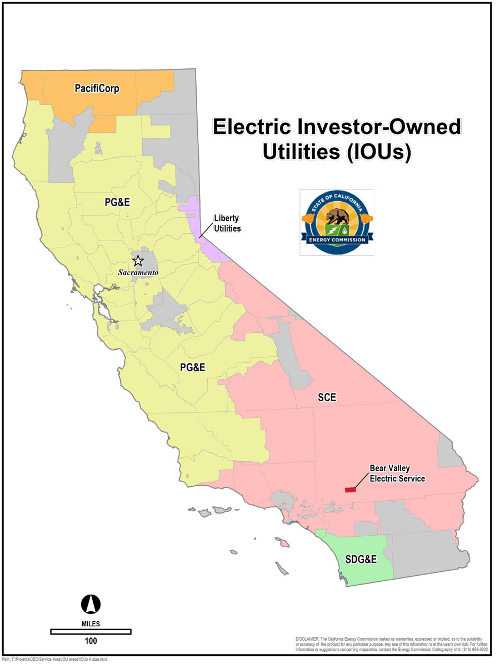 As the most populous state in the country, California faces unique energy challenges. California uses the second most energy of any state (following Texas), but per capita our residential sector uses less energy than any other state except Hawaii¹. This can be largely explained by efficiency requirements in the state’s building code, which mandates certain energy efficiencies when building and maintaining structures.

While California produces a huge amount of energy, and leads other states in renewable energy generation, we also import energy, specifically from Oregon and Washington, and the Southwest. This only happens when those states have a surplus of energy. As temperatures rise and more people use air conditioning, fewer states will have a surplus to share with California.

In California, three investor owned utilities (IOU’s) control about 75% of all electricity transmission. Pacific Gas and Electric, San Diego Gas and Electric, and Southern California Edison, in addition to three smaller IOU’s, deliver gas and electricity while also delivering profits to their investors. Some have come under increasing scrutiny about their role in recent state wildfires. PG&E was found liable for large fires in 2018 and 2019, including the Paradise fire. Just a few weeks ago, PG&E announced a plan to bury thousands of miles of power lines in an effort to reduce fire risk².

One outcome of the 2019 fires was renewed attention on Public Safety Power Shutoff (PSPS) events. Although PSPS have been standard practice for decades, the 2019 events were widespread, and affected over 3 million Californians³. These shut offs are intended to reduce the risk of fires from wind affecting power lines and transformers. As more Californians live in areas at risk of wildfire, these shutoff events are supposed to limit the risk of fires starting and spreading. PG&E has warned that PSPS are going to be more common over the next decade⁴.

What are my “power” options?

In addition to Investor Owned Utilities (IOU’s), Community Choice Aggregates (CCA’s) are non-profit agencies that can source energy for customers. CCA’s originally stem from a 2002 bill (AB 117) that grants Californians the right to choose the source of their electricity⁵. CCA’s typically give cities more autonomy over where their electricity comes from. IOU’s continue to deliver electricity, but CCA’s are in charge of sourcing it. There are currently 19 CCA’s in CA which source electricity for over 4 million Californians⁶.

For example, in Oakland and Berkeley, electricity is sourced by East Bay Community Energy (EBCE), our local CCA⁷. In 2018, Berkeley City Council voted to choose carbon free electricity for all residents of Berkeley. EBCE also offers entirely renewable (wind and solar) electricity to residents at a price premium, if they choose.

In short, CCA’s are just another way to source your electricity. EBCE and PG&E work together to get electricity to your home if you live in the East Bay. 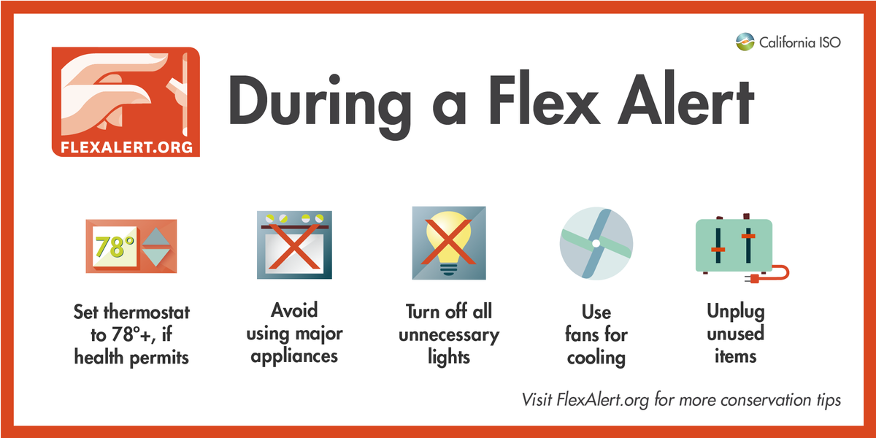 Flex Alerts are similar to Time of Use and Public Safety Power Shutoffs because they are all tools to reduce electricity usage during certain periods. Flex Alerts are a voluntary request to reduce electricity usage, usually in order to prevent more severe grid issues. Flex alerts are issued on days where a lot of electricity will be used, typically hot days when air conditioning use is higher than normal. These flex alerts are voluntary, but they are typically issued only when the state is in serious danger of using too much electricity.

A confluence of factors will make flex alerts more common, including hotter days, less water for hydro-electric power, and an aging electric infrastructure.

You may have seen billboards around Oakland with images like this on them: 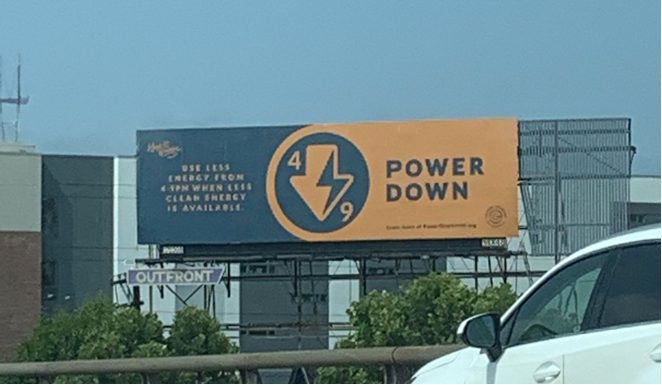 Text reads: “Use less energy from 4-9PM when less clean energy is available. POWER DOWN”

“Powering down” your home is the goal of the advertised Time of Use (TOU) rates. In 2020, PG&E, the Bay Area’s primary investor owned utility (IOU), changed TOU hours to 4-9pm for most residential customers. This means that electrical rates are higher in the evenings, but lower at other points in the day for most. 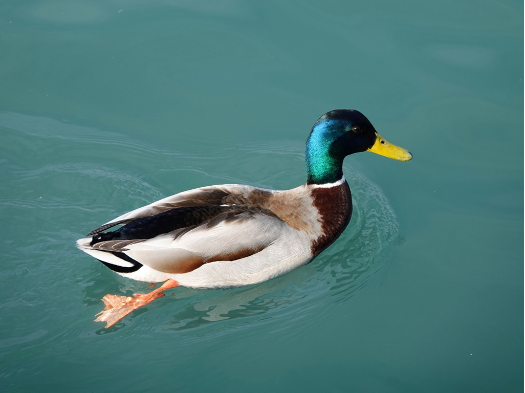 Time of Use rates all started with a graph that looks like a bird. It’s called the duck curve. 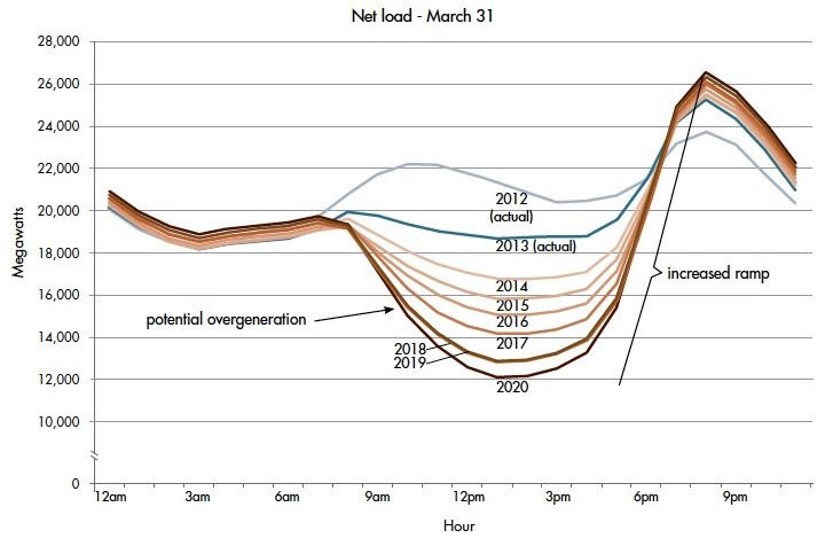 In the evening, there is both a high demand for electricity when more people get home and start using appliances, lights, and heating, and a lack of solar electricity as the sun goes down. The head of the duck is when electricity use is at its highest in the evening. In California, when demand is higher than expected in the evening, other sources of electricity must be used in order to supplement renewable electricity. This can mean higher amounts of “dirty” energy sources, like coal powered plants and natural gas. While solar energy is used during the daytime, fossil fuels can be used at any time of day, so they will often be used to fill the demand for energy in the evening. To avoid this carbon intensive and expensive prospect, PG&E offers the Time of Use rate plan. 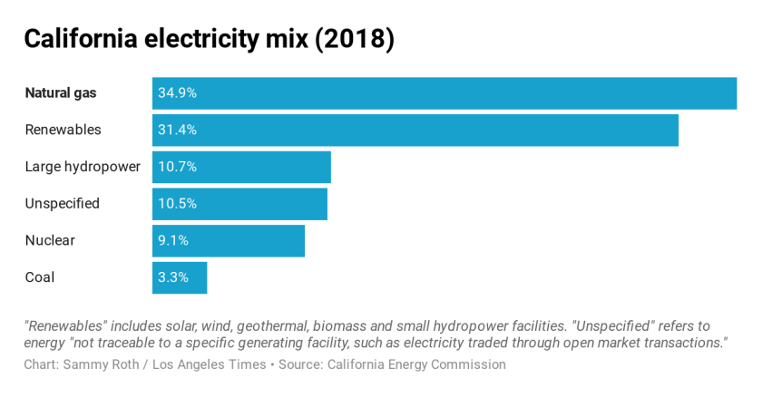 The electricity mix tells us which energy sources are used to produce electricity. This chart shows CA’s 2018 mix.

Alternatives to Time of Use (TOU)

There are other ways to reduce electricity usage without increasing costs. Reducing stress on the grid is sometimes referred to as “flattening the duck” or “teaching the duck to fly”. These methods focus on one, reducing peak loads (how much energy people use) and two, increasing energy production (how much energy we create). As more and more people in California rely on solar power, finding and distributing better ways to store energy, like solar batteries, will let us use solar power throughout the day and store it to use in the evening and night. Alternatives include building better infrastructure, like upgrading transmission lines and large scale storage solutions,  and can be more expensive.

IOU’s could also use strategies like deploying renewable energy during peak evening hours. For example, although hydropower is controversial and has its own set of hazards, it can be utilized after the sun has set, much like fossil fuel sources. The same is true of wind. Many of these decisions fall upon IOU’s such as PG&E. If you want to see different decisions being made,  contact your state representatives to voice your opinion on this topic.

For now, encouraging electricity consumers to reduce use in the evening is the common method encouraged to conserve clean energy. Although this can lead to higher charges for some households, it also means an opportunity to make a difference.

Under this new rate plan, households can both reduce energy usage and save money. This is the perfect opportunity to make a difference in the larger world, right at home. Some ways to save energy include:

Time of Use can take some getting used to. While we wait for other solutions, reducing your electrical use during the evening can be a way to make a concrete difference and prevent emissions.

California is one of the sunniest states in the country. Regularly boasting over 250 days of sun throughout the state, this phenomenon has helped the state have the largest solar panel capacity in the country. CA has almost 30 GW of solar capacity, over 4 times as much as the next highest state, Texas⁸. 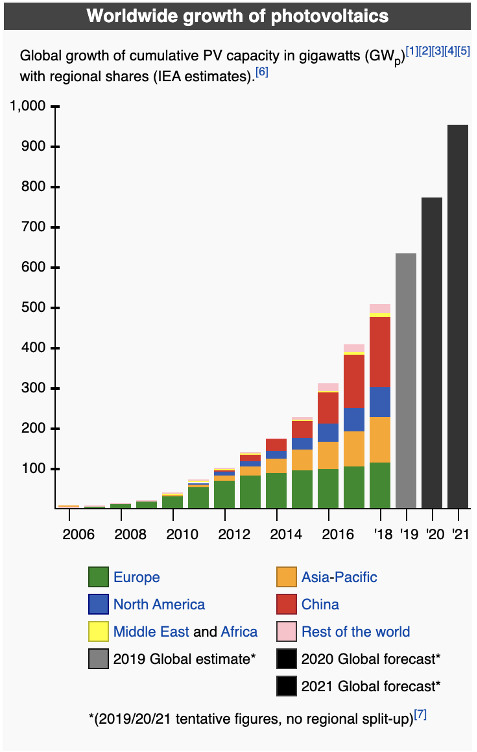 Despite this plethora of panels, more needs to be done. Battery technology is an area ripe for improvement, as we scramble for a way to store solar energy at night. Luckily, there is a huge amount of effort being put into this field, and the next few years may have further breakthroughs⁹.

The amount of energy that hits the Earth from the sun in 90 minutes is enough to power our entire world for one year10. Although we aren’t there yet, the next ten years may have significant advancements in store. Energy storage and solar can help us power our world in a more sustainable way.

We haven’t even gotten into how this all relates to electric vehicles. If you’re interested in learning more about electric vehicles and what you should consider when purchasing one, read our factsheet on the topic. PG&E has a page about driving and charging electric, and even a comparison webpage where you can look at your current rates and how your rates may change after purchasing an electric vehicle.

Electric vehicles have no tailpipe emissions, and it is possible to charge them at home with some minimal changes. Contact PG&E or EBCE to learn more about this process.

Get involved and take action

The City of Berkeley has a Building Electrification Strategy, which helps residents and businesses replace gas powered appliances with electric alternatives. The Berkeley Climate Action Coalition is a way to stay active, share resources, and make your voice heard. Join a strong network of individuals and groups that are interested in clean energy, sustainability, and other climate topics and are doing the work to implement it. Join the BCAC Electrification Working Group today to plug into local and larger-scale policy updates, discussions, and events.

2 thoughts on “Why Turning That Light Switch Off Actually Matters: A Dive into CA Electricity, Power Usage, and Legislation”