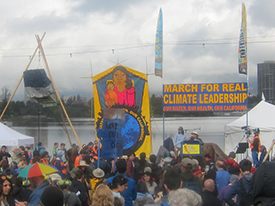 On Saturday, Feb 7th, I took to the streets along with 8,000 others to march in support of real climate leadership across the state of California and beyond. The march was a peaceful – yet powerful – assembly of advocates, activists, and allies of the vital climate justice movement. As the threat of climate change looms, I feel pleased to see this call to action intensifying. Our power is generated by people in the streets creating the platform for this shared environmental cause.

While marching, I couldn’t help but wonder: what exactly does real climate leadership look like? Is it the amalgamation of faces within the crowd, is it the organizers of the march who were pushing for a larger mobilization of individuals sympathetic to their cause, or is it those who wield substantial power currently and might hope to radically disrupt the institutions and systems which have jeopardized the future of our communities? After the march, I began to settle on the idea that all of the above are truly real climate leaders. As I understand leadership, there’s no “one-size-fits-all” qualification. As far as I’m concerned, all the people in the streets of Oakland marching for climate leadership are leaders in their own right. People like Jane and Alison of Berkeley who were willing to share their perspective, their laughter, and their wisdom on the BART ride over to the march are real leaders in my eyes.

In the same way drastic climate change threatens us all, the leadership from whom we seek solutions should be reflective of diverse communities. In fact, as I reflect on my experience marching in New York City back in September, in seeking climate leadership of today we must prioritize the inclusion of those who face the greatest impacts of climate change now and not later. These are the inhabitants of vulnerable frontline communities, these are our brothers and sisters often on the margins of current decision-making but most certainly bear the impact of those decisions.

It became to clear to me throughout the day that most of the marchers and activists on Feb 7th aren’t confident that Jerry Brown or other government officials are the leadership we need to face the impending climate crisis. A huge portion of the march featured anti-Jerry Brown sentiments. Some funny and some serious, the call for Jerry Brown to ban fracking has never been louder in my opinion. Coincidentally, I witnessed Jerry Brown speak to an audience of 2,700 teens about the threat of climate change just five days after the march in Oakland. This served as an unfortunate reminder that the rhetoric of politicians doesn’t always match their actions.

For 1.8 miles on February 7th, I saw real climate leaders who affirmed my hope. I witnessed a multi-generational group of impassioned and diligent individuals. What I love about marches and large public actions is that they leave me with optimism about the brewing collective push towards a more sustainable future. Marching in the streets with strangers who share my ideals and beliefs, helps me to embrace a mobilized sense of community. I am always thankful to stand in solidarity with other climate activists and for those who organize these marches. I’d like to thank 350 Bay Area and my friend Shoshanna Howard with California Students Against Fracking for her part in helping organize the march, and for encouraging me to continue my writing.

I was impressed and inspired by the thousands of people informed about pressing issues concerning the safety of our environment. I was encouraged to continue to seek out solutions to the problems diminishing our chances of a vibrant future. In doing so, I hope to continue collaborating with the leaders of today and tomorrow, as I see these alliances to be essential in fortifying a more socially and environmentally just world. Keep marching for real leadership, real solutions, real answers to necessary questions and we will eventually arrive at our shared promise land.