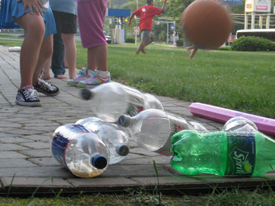 The Healthy Child Initiative is a campaign to put a sugar-sweetened beverage tax on the November 2014 ballot. At a packed meeting on Tuesday, City Council unanimously approved taking the first step for it to be included on the ballot, by including it in a community poll of potential ballot measures. If passed, Berkeley would be the first city in the country with a soda tax. The beginnings of this big campaign was covered this week in Berkeleyside and the Vallejo Times-Herald, and was on the KPFA evening news.

The Healthy Child Initiative is being proposed by the Berkeley Healthy Child Coalition (BHCC), an alliance of parents, educators, residents, public health professionals, dentists, and community organizations. The Ecology Center is a founding member of the BHCC. On the Ecology Center’s involvement, our Executive Director Martin Bourque says, “We helped start this community effort to bring about lasting public policy and evidence-based solutions to this diet-related health crisis.”

The ballot measure would institute a one-cent-per-ounce excise tax on drinks that have added caloric sweeteners, such as sodas, sports drinks, coffee drinks, energy drinks and iced teas. The tax would be levied on distributors and does not apply to diet drinks, milk products or drinks such as Ensure that are taken for medical reasons. Economists have estimated that a penny-per-ounce tax on sugary drinks would reduce consumption by 10 to 15 percent over a decade. Research by UCSF Professor Kirsten Bibbins-Domingo concluded that over a 10-year span, passage of such a tax nationally would prevent an estimated 95,000 coronary heart events, 8,000 strokes, and 26,000 premature deaths, while avoiding more than $17 billion in medical costs, in addition to generating approximately $13 billion in annual tax revenue.

“The Ecology Center has been working for over a decade to reduce diet-related illness and the unacceptable health disparities in our community. Taxing sugary drinks is a logical extension of that work. It’s a public policy solution that creates a disincentive to purchasing sugary drinks, while generating funds that can help our kids make more educated and informed decisions about their health,” says Martin Bourque. The revenue generated from the tax could fund community health and nutrition programs for children and youth, including Berkeley public schools’ award-winning Cooking and Gardening Programs, which recently lost federal funding. See our past posts on that funding crisis here and here.

Will you join is in showing your support? Visit the campaign’s website at www.BerkeleyVsBigSoda.org, and sign on there. You can also look for petitions to sign on your support at our Farmers’ Markets or at the Ecology Center.