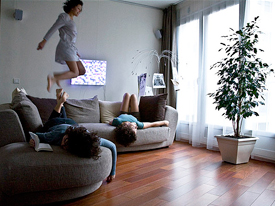 Good tidings! The Center for Environmental Health announced that Gov. Jerry Brown approved new standards that protect everyone’s health, by limiting unnecessary exposure to toxic flame retardants. This is a toxicity in the home issue that we have been following for quite some time. Let’s take a moment to celebrate that we can start getting the toxic flame retardant out of our furniture, oceans, and boobs! Read on for the full message from CEH.
“Great news: just days ago, California’s Governor Jerry Brown made an announcement that will protect the health of children and families across the country!

The state’s new furniture flammability standard (TB 117-2013) has finally been approved. This means that, for the first time in over 38 years, furniture manufacturers will soon be able to make products free of flame retardant chemicals linked with reduced IQs, obesity, cancer, and other serious health problems.

Along with our allies around the nation, CEH has pushed for this sweeping change for years. But this landmark victory for children’s health simply wouldn’t have happened without support from YOU and the many thousands of concerned parents and other CEH members who signed petitions, took action, and called government officials. As a result of this hard work, we will soon be able to buy fire safe, flame retardant free furniture!

Thank you for standing up for families’ health.”