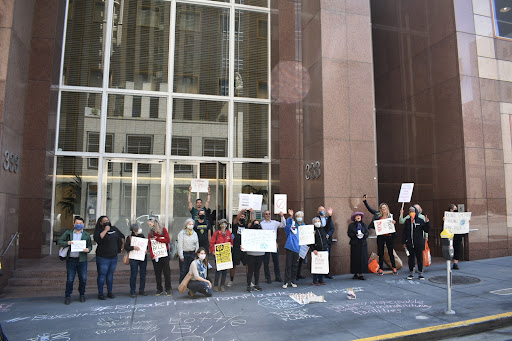 On July 20th, youth, organization representatives, and community activists hosted a plastic-free rally in front of CA Senator Alex Padilla’s office in San Francisco. The Ecology Center staffers among the crowd were one of the many groups advocating for concrete and immediate action on plastic production and waste management at the federal level, and beyond.

Earlier this year, Senator Jeff Merkley (OR) and Representative Alan Lowenthal (CA), brought the Break Free From Plastic Pollution Act (BFFPPA) to the Senate as proposed Bill 984. This legislation is a new and improved form of the bill brought to the Senate during the 2020 legislative session. It is currently co-sponsored by 12 senators. 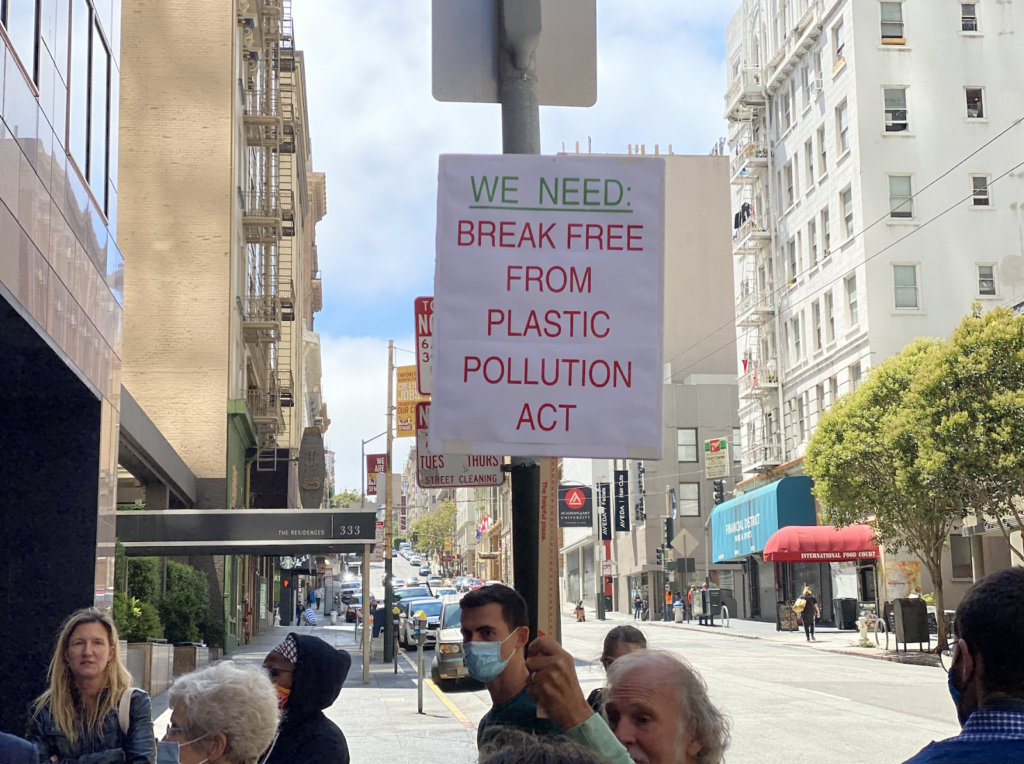 The Break Free From Plastic Pollution Act is a currently proposed piece of legislation in the US Senate.

The Act takes aim at plastic pollution, both downstream and upstream. It would:

This proposed amendment to the Solid Waste Disposal Act (first passed in 1965) would have significant ramifications for consumers, producers, and the recycling industry as a whole. It includes language for extended producer responsibility (EPR), a strategy that environmental advocates have long pushed for. EPR ties environmental impacts of products to those that create them, meaning that beverage container producers would be forced to take responsibility for their products from cradle to cradle.

The rally was organized by Beyond Plastics volunteer Louise Lipsey. Speakers included:

The rally was focused on getting public attention on this revolutionary proposed bill, and convincing Senator Padilla, one of CA’s two senators in D.C., to co-sponsor the bill. Activists from the Ecology Center, Sierra Club, Sunrise Movement, and other local groups took turns speaking about legislation and grassroots efforts to make a change. 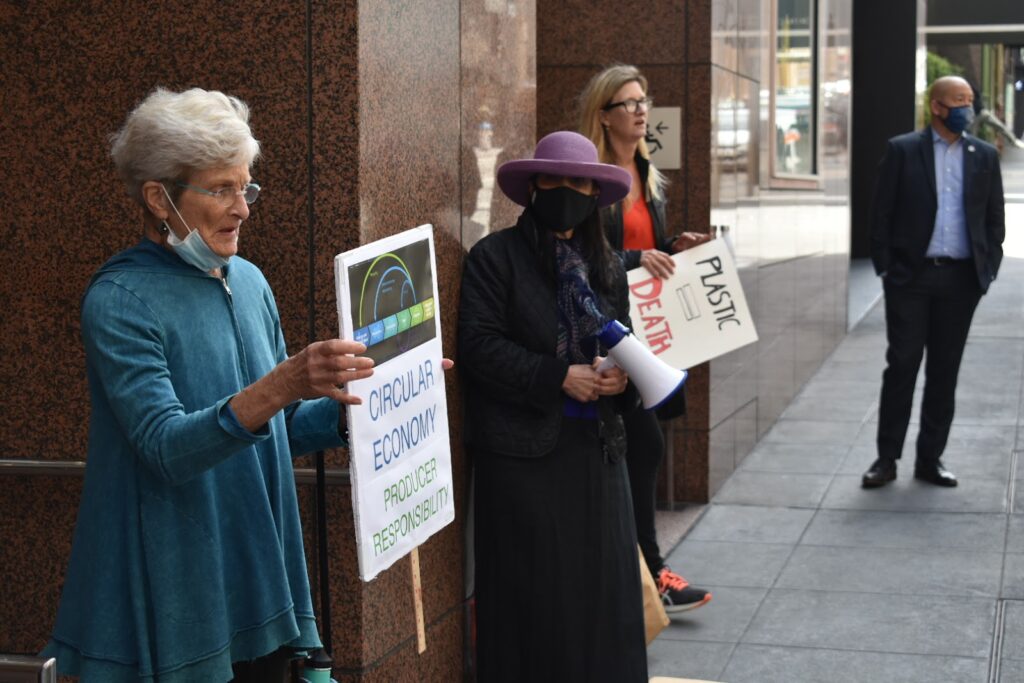 Denaya Shorter of the Ecology Center lauded the bill, and spoke about how recycling is not the way out of this plastics crisis, but can complement other efforts like legislation and consumer choice. “Even decades into this progressive recycling movement, we are still in a crisis,” Shorter explained. She went on to explain that over 85% of plastics do not get recycled, and the ones that do are often recycled only once before ending up in a landfill or a waterway. Recycling is an integral part of preventing more waste from going to the landfill, but more upstream solutions need to happen. This bill could help the recycling industry and reduce the amount of waste that is produced. 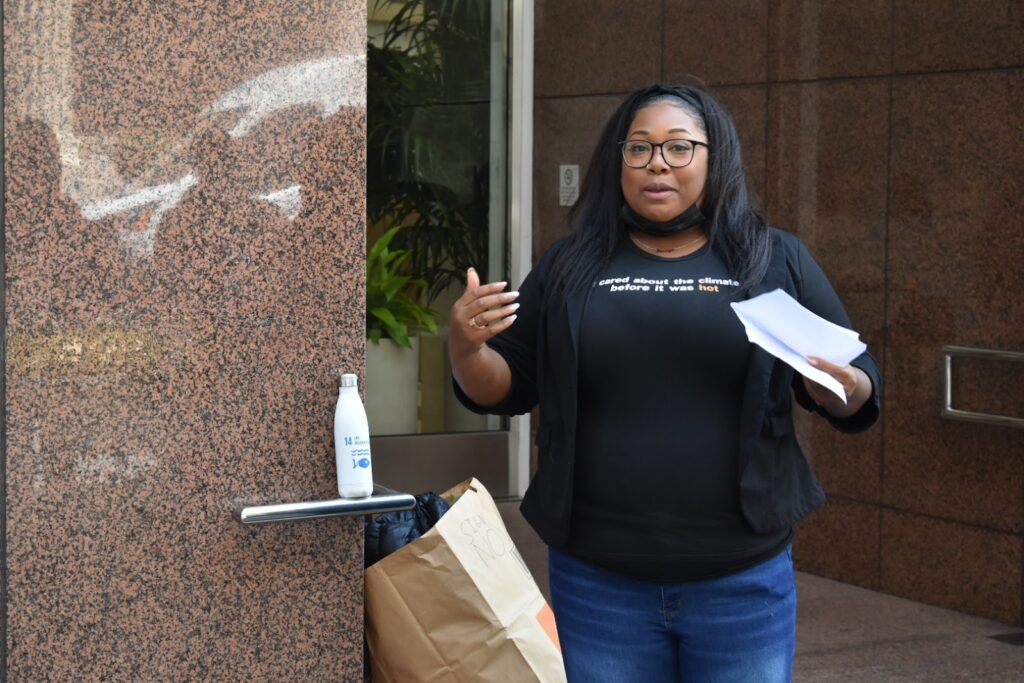 After the speakers, local youth attempted to bring this issue to Senator Padilla’s attention with a demonstration. Carrying a bag filled with plastic single-use beverage containers, they started to deliver it to his office. Inside several of the containers were personal messages for the Senator from concerned citizens. Although security did not allow them to pass, many of the bottles were hand delivered to the Senator’s office. 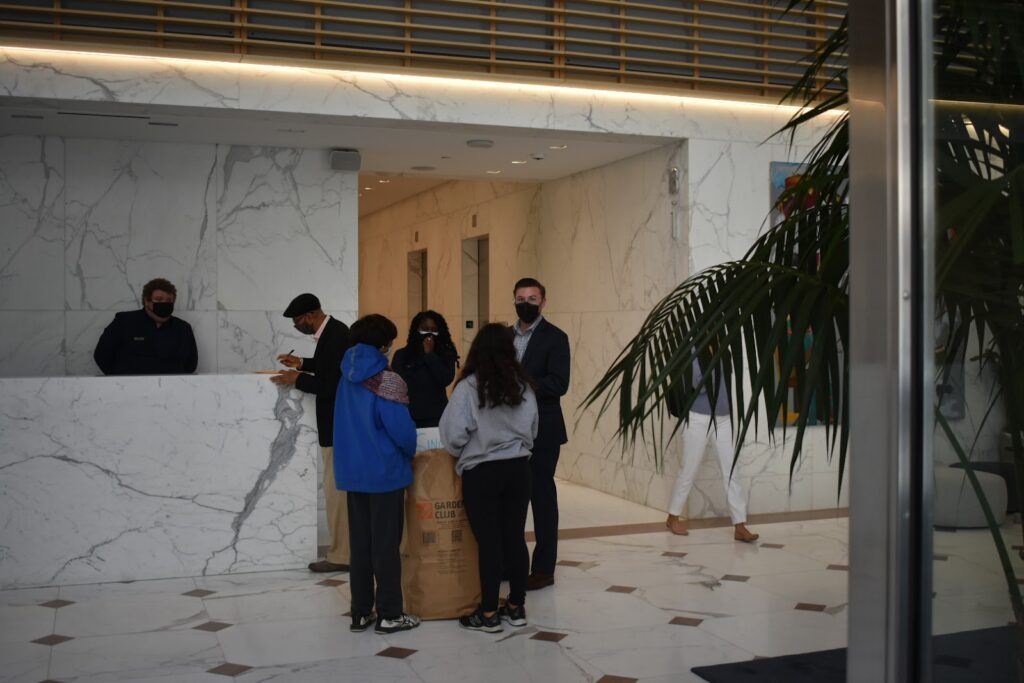 Local youth delivering a bag of single use plastics to Senator Padilla’s office.

Federal legislation is one important method to reduce plastic pollution. One million plastic bottles are produced globally every minute. Until careful and precautionary measures are taken upstream, downstream interventions will not be enough to curb the plastics crisis. We urge you to please contact your senator and representatives, and join us as we continue to educate and push for legislation that will impact our daily practices today and in the future. The Ecology Center hosts events year round focusing on legislation, community actions, and concrete ways to make plastics reductive and zero waste changes. Plastic Free July is our annual month-long effort to share about the effects of plastics on our communities and planet. Visit our website to view recordings of 2021 PFJ events and access resources to reduce your plastic footprint. Sign up for our newsletter to stay updated on our events.