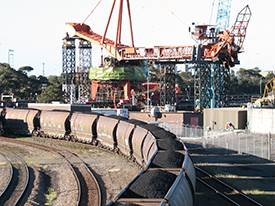 No Coal in Oakland is asking allies throughout the State to call, write, tweet, or fax Gov. Jerry Brown on Monday, April 25. We are fighting a plan to transport up to 9.5 million tons per year of Utah coal through Oakland for export overseas.

Last July at the Vatican, Gov. Brown said to the Pope that 90% of coal must stay in the ground to avoid climate disaster. But what has our professed climate leader done to stop coal trains from coming through his hometown? Nothing!

The San Francisco Chronicle, Oakland Tribune (now East Bay Times), East Bay Express, and thousands of his fellow Oaklanders have asked Gov. Brown to take a stand against coal, but so far he is missing in action. Please join us in a state-wide all-day call-in to call-out Gov. Jerry Brown for his silence on the Oakland coal scheme:

Call on Brown to:

California State Senator Loni Hancock has spearheaded two bills that aim to prevent Oakland from becoming the largest export port for polluting, dirty coal on the West Coast. SB 1277 authored by Senator Loni Hancock would immediately outlaw the land shipment of coal to the Oakland Bulk and Oversized shipping terminal, and its subsequent overseas shipment from that terminal. SB 1279 authored by Senator Loni Hancock would immediately prohibit the California Transportation Commission from programming or allocating any state funds for any project at a port facility, located near a disadvantaged community which exports, or proposes to export, coal from California.