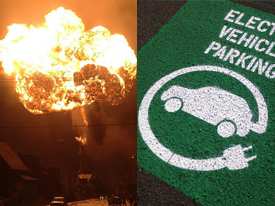 What kind of environment do you want to live in five years from now? You can make a healthy climate and a healthy community part of your vision by taking two actions today: asking your State Senator to support the Charge Ahead California Initiative (SB 1275), and urging BAAQMD to halt new oil infrastructure projects. By taking these actions, we’ll expand the win-win projects we want more of, and prevent the worst-polluting plans from going forward.

The Charge Ahead California Initiative would task the State Air Resources Board with expanding the number of electric vehicles on the road in California, by adding electric vehicle incentives into existing vehicle retirement programs and creating new programs for low-income communities. It would also help local government agencies to add hybrid and zero-emission trucks and buses to their fleets. Expanding use of electric vehicles reduces climate damaging greenhouse gas emissions. There’s a 75% reduction of polluting emissions in switching to an electric car from a gas car. By replacing gas cars with zero emission electric cars, we can improve air quality and by extension, the health of 40% of California’s population who live near major roads and freeways. Low income families face disproportionate impacts from poor air quality, including asthma, cancer and other respiratory illnesses, and are doubly vulnerable with the expected impacts of climate change also hitting them harder. Electric vehicles are also cheaper to fuel up, costing about a dollar-per-gallon compared to the Bay Area average for gas last month of $3.63 per gallon. The roller coaster of changing gas prices are also left behind with the switch to electric, as the price of electricity has held steady for the past 40 years. Click here to send a message to your Senator to support this win-win-win and put more electric vehicles on the road in California.

Advocating to expand proven, effective programs like Charge Ahead California is one route to bringing changes we want. Another equally important tactic is preventing the worst plans from moving forward, like the five proposed plans to bring more and lower grades of crude oil into Bay Area refineries via rail. Many Bay Area communities are coming together to petition Bay Area Air Quality Management District (BAAQMD) to halt plans for expanding oil infrastructure until these projects’ cumulative impacts on public health, air quality, and safety are fully assessed. These projects are not only tied to increasing air quality pollution for Bay Area residents, they also mean higher greenhouse gas emissions, and put communities at even greater risk of catastrophic events. Transport of oil by rail is increasing, but not because it’s safer than other alternatives. In the past year, several communities have been devastated by accidents involving trains carrying crude, like the explosion in Lac-Megantic, Quebec last summer, that killed 47 people. There’s not anything different between the oil by rail rolling through these communities and what’s proposed in the Bay Area- except that here it hasn’t happened yet. We have a chance to ask the agency tasked with protecting our health to halt these plans. Be a climate and community health champion and click here to send a message to BAAQMD.

2 thoughts on “Two Climate Actions You Can Take This Week”