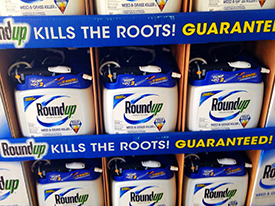 A new study published this week draws the conclusion that glyphosate, the main ingredient in Roundup, is a likely carcinogen. This study has quickly caught media attention in part because it is coming from a well-respected, international group of scientists connected to the World Health Organization. Categorizing glyphosate as a probable carcinogen is a strong challenge to a product that has long been claimed to be relatively safe, and is now the most widely used herbicide in the world. Roundup is primarily used on Roundup Ready genetically modified crops like soy and corn, so this study is a blow to the might of an interconnected and destructive food system. The implications of this study are terrible for farmworkers, and communities near sprayed fields, but harm prevention can’t happen with out first having accurate information.

How should we respond to this study? First, we should be concerned. Second, we should use our concern and the news to strengthen the case that we don’t need chemical inputs into our food system – organic and pesticide-free growing practices do just as well to feed us, and keep everyone in the food chain free from harm. It’ll be interesting to watch the response from Monsanto (especially on social media). Be on the look out for opportunities to press the EPA to take the healthiest and safest route forward on glyphosate. For more on this news, check out Tom Philpott’s post on Mother Jones, or read what NPR’s reporting on the Salt.