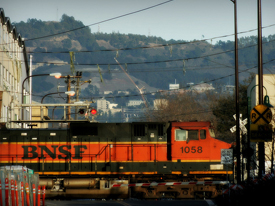 Oil companies in the Bay Area have proposed plans to move explosive fracked crude oil through major Bay Area cities, using the same tracks as Amtrak’s passenger rail line. This move puts all the cities along the path of this rail route at risk, including Richmond, Berkeley, Oakland and San Jose. This region has a much higher density than the tiny town of Lac Megantic, Quebec, where a train carrying a similar kind of oil exploded last summer, killing 47 people. According to the Environmental Impact Report (EIR) filed for this plan, accidental oil spills along the tracks would be “significant and unavoidable.” Check out this report from the local CBS station for more on the proposed plan to transport this oil by rail through Bay Area cities.

The good news? Community members from many refinery towns have been speaking up against infrastructure expansion at local city council meetings, and a growing East Bay movement is voicing the risks everyone in our region would face if these polluting plans roll out. In Berkeley at the City Council meeting tonight, Vice Mayor Linda Maio will introduce a resolution opposing crude-by-rail coming through Berkeley, and calling on local and state leaders up and down the rail lines and across California to do the same.

You can join the Sierra Club and others to support Berkeley in taking the lead against Big Oil’s crude by rail proposals! The City Council meeting starts at 7pm, and with a rally at 6:30pm to support this important resolution. Come on out, the stakes are high for our environment and health!

For more about the regional effort to stop refinery expansion plans and transport of oil by rail, check out the Sunflower Alliance website.