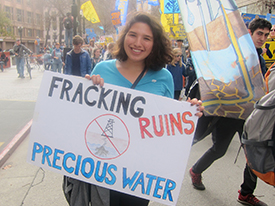 This week, a NASA researcher published an op-ed with the title, “California has about one year of water left,” causing a viral drought frenzy on the internet. Individual drought-shaming is already a trend, and Governor Brown asked every Californian to conserve water when he declared a drought emergency last January. Our collective effort should be used to hold him to the same standard, especially when it comes to fracking.

The industry doesn’t just contribute to climate change by pulling up oil and gas from the ground. It’s a water hog, and is also illegally polluting precious aquifers on a potentially devastating scale in our state. The largest anti-fracking event in history was organized in Oakland last month, with one simple message: for Governor Brown to take action on fracking in our state. He didn’t get the message (even though 8,000 people turned out to deliver it), so groups are continuing to push for his leadership to stop fracking. Now, there’s an emergency petition circulating that requires his response within 30 days. It was filed on February 26 by 150 groups, and needs Californian’s support. Please sign, and spread the word.

Each fracking well uses 140-150 thousand gallons of water each day. Thousands of fracking waste-water wells have already polluted very precious water supplies: last fall reports came out that billions of gallons of fracking waste-water had contaminated underground aquifers with toxins like arsenic and benzene. In the Central Valley, these aquifers are what farmers and residents rely on for irrigation and drinking water when surface water is unavailable – and that’s exactly what is happening with the drought. The contamination occurred because of mistakes by the state agency charged with regulating the oil and gas industry to prevent this type of risk to our water supply. Now is the time to stop any further destruction, by telling Governor Brown California can’t afford this risk to our water, agriculture, and health.

3 thoughts on “Tell Governor Jerry Brown: Stop Fracking, Do It for the Drought.”