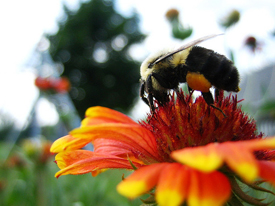 Beyond Pesticides is championing a new effort to create national protection for bees and insect pollinators. The proposed bill comes after 50,000 bees died in an Oregon parking lot last month, due to application of neonicotinoid pesticides. Read their call to action, contact your congressperson, and spread the word!

On July 17th, Representatives John Conyers (D-MI) and Earl Blumenauer (D- OR) introduced H.R. 2692, the Save America’s Pollinators Act, calling for the suspension of neonicotinoids, a class of systemic pesticides that are killing bees.

Tell your Representative to save America’s pollinators!

The United States is lagging behind our European neighbors when it comes to the protection of pollinator health. Earlier this year, the EU announced a two-year suspension on these bee-killing pesticides. Now its time for the U.S. to act.

The Save America’s Pollinators Act would suspend the use of neonicotinoid pesticides until a full review of scientific evidence and a field study demonstrates no harmful impacts to pollinators.

Background:
The systemic residues of these pesticides not only contaminate pollen, nectar, and the wider environment, but have repeatedly been identified as highly toxic to honey bees.

With one in three bites of food reliant on bees and other beneficial species for pollination, the decline of honey bees and other pollinators demands swift action. Mounting scientific evidence, along with unprecedented annual colony losses at 40 to 90 percent this year, demonstrate the impacts that these pesticides are having on these fragile species.

Let’s BEE Protective and support a shift away from the use of these toxic chemicals by encouraging organic methods and sustainable land management practices in your home, campus, or community.

3 thoughts on “Tell Congress to Save America’s Pollinators”