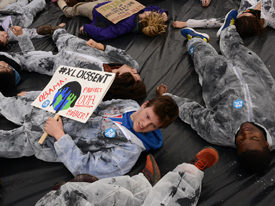 This weekend, hundreds of young people were arrested in front of the White House at a protest against the controversial Keystone XL pipeline. Student groups came from across the country to participate, and they had powerful messages for President Obama, with signs saying “Stop investing in the destruction of our future,” “We > tar sands,” “Stop the pipeline or the people will,” and “We did not vote for Keystone XL.” The protesters created a mock oil spill, and used zip ties to chain themselves to the White House fence, dubbing the action “XL Dissent.” Young people were key constituents who voted for Obama, and student-led groups have become fierce advocates for protecting our climate and their future, with many successes as part of 350.org’s divestment campaign.

The protest comes shortly after the State Department determined that an environmental impact analysis of the proposed pipeline did not violate conflict-of-interest rules, despite being prepared by a former contractor of the company who would build the pipeline. These reports are stacking up in favor of the project going forward, so protests like the one this past weekend are critical to continue to put the heat on Obama. Will he stand with the young people who elected him, or the fossil fuel companies who will profit? Click here to join a local effort to oppose the pipeline.

For more on the protest, including coverage of a local action, head to BillMoyers.com