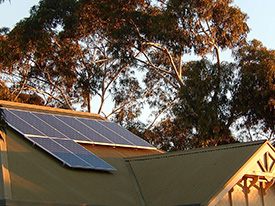 The California Public Utilities Commission (CPUC) continues to be the center of action for climate activists working to expand local, clean energy generation in our communities. The CPUC is tasked with regulating the utility companies, which have a virtual monopoly on energy production and distribution in our state. These big, investor-owned utilities have historically influenced the CPUC’s decisions, but activists have begun to change that by turning out standing-room only crowds and circulating letters. Here’s a call to take action in the lead up to another CPUC meeting tomorrow, January 14, from our allies at 350 Bay Area.

Right now, thanks to the hard work of many activists, the CPUC is poised to enact a decision on net metering that would maintain the policies on rooftop solar that have made California a clean energy leader over the past few years.

But now our major utilities are pulling out all the stops, lobbying the PUC to weaken the final decision. The outcome will have major implications for health and well-being in our own communities and other states that are looking to California as a solar leader. We need to speak up once more, at the CPUC’s meeting on January 14th. This will be their last meeting before they will vote on the future of net metering on Jan 28th. Here’s how you can take action and help protect rooftop solar:

You can RSVP and learn more about this action here. We encourage you to take the opportunity to speak during public comment, but showing up at the meeting and being visible has a big impact, too!

For more background on last month’s meeting and the proposed decision, read this article from the Los Angeles Times, or this piece published before the meeting happened from KQED Science.