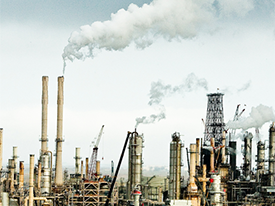 The five Bay Area refineries are poised to start importing large amounts of oil from the Canadian tar sands.

Why does this matter? Tar sands are a highly polluting fossil fuel that are dangerous to transport, process, and store.

Converting crude oil derived from the tar sands, called bitumen, into useable fuel takes so much additional energy that it is the most greenhouse-gas-intensive oil around – using 14% more energy to produce than a conventional barrel of oil. As tar sands extraction continues, that number is likely to rise, as readily accessible deposits and grades that require less processing are the first to be used. Bitumen is also very dense so it is diluted with lighter, more flammable and explosive oils to be transported. When shipped by rail, this material creates “bomb-trains” that may explode from minor derailments, as happened in the Canadian town of Lac-Megantic, where 47 people were killed in 2013. Tar sands oil also contains greater amounts of toxic heavy metals like nickel and lead, and higher levels of sulfur, which can corrode pipes. High sulfur levels caused the severe corrosion of refinery piping that led to the 2012 Richmond Chevron fire.

All of these factors make tar sands oil one of the greatest threats to the daily health and safety of our local communities and the long-term protection of our climate.

What can you do? Come to the Spare Our Air organizing forum on April 21st.

You don’t need to be an organizer or activist – you just need to care about the air that we breathe. At the April 21 community gathering, you will learn how you and your neighbors can help push local air regulators to adopt limits, known as emission caps, on toxic refinery emissions this year, to keep tar sands refining out of the Bay area.

Tragically, the Bay Area Air Quality Management District (BAAQMD), the government agency tasked with controlling local air pollution, seems ready to give these tar sands refining a green light. This recent article posted by the Sunflower Alliance, provides an overview of the uphill battle to block Canadian tar sands from flooding into Bay Area refineries, as well as BAAQMD’s backpedaling and lies.

You can also read artist activist Abner Hague’s comic strip which depicts the community struggle to push BAAQMD to implement emission caps. Earlier this month, Abner spoke at Changemakers for Climate and shared tools for advocacy through art. Changemakers for Climate is a monthly policy brief hosted by the Sierra Club and Ecology Center exploring Bay Area climate campaigns (coal exports, crude by rail, community choice energy, etc.) and next steps for action. You can hear audio recordings of previous Changemakers events here.

Food and refreshments will be served.

Spread the word. Share a downloadable flyer with friends and colleagues.